hiatus
an interruption in the intensity or amount of something [syn: suspension] .
a missing piece (as a gap in a manuscript)

I love Christmastime. It has absolutely nothing to do with Christ, wise men from the East or stars shining above Bethlehem. It has everything to do with the winter solstice and people feasting and drinking - marking time, saying - "We are alive here and now, travellers together. And there is too much stress and misery in the world so let us eat drink and be merry!" I feel some bitterness towards Christians who hijacked our pagan festivities and then had the sheer gall to lambast those of us who choose to overlook the fairytale about Mary and Joseph and the baby Jesus born in a stable. Sheer bollocks!
Before Christmas, the excitement builds. You rush around buying presents, crackers and chestnuts. You order a big fat turkey and post cards to far flung corners of the world. You ask friends and work colleagues what they are doing for Christmas. Your wife gets the lights down from the loft and tinsel bedecks your home. And then the great day comes and the streets are quiet and there are no thoughts of work and the humdrum world. You rip open your gifts and stick the turkey in the oven, pull your crackers and watch "The Royle Family" on TV. It's great - Christmas.
Then you enter the hiatus between Christmas and New Year. Over-eating has caused unfamiliar rumblings in your bowels. You sleep late. You gather up empty bottles and cans for recycling. You notice gifts scattered near the fireplace and the carcass of the turkey you assaulted on Christmas Day sits in the kitchen like an offbeat advertisement for Amnesty International. Eager anticipation is replaced by a certain emptiness. You look ahead to the next year looming. There is nothing on television worth bothering with. No cards drop on your mat and nobody phones.
Today I made a turkey stew that Jamie Oliver would have been jealous of. Complete with swollen pearl barley, chunks of celery, carrots and turnip, six fat dumplings floated on the surface. A dash of red wine, a couple of bay leaves, mixed herbs and a rasher of grilled bacon. I served it with flat bread coated with sizzling garlic butter. I might have called it "Hiatus Stew".
Down at "The Banner" tonight, the atmosphere was subdued. Christmas over. The feasting done. Waiting for New Year's Eve and 2009. Not everybody makes it. Some of us fall by the wayside. This gift of life is something we should not take for granted.
I dedicate this post to the displaced Palestinian people of Gaza murdered by the self-righteous Israeli war machine - children and women, the elderly and the poor. Over 230 dead and 700+ injured. Indiscriminate and unforgivable killing that should, by rights, attract fierce international reprisals but of course that won't happen. Words will be twisted and legitimate Palestinian freedom fighters will once again be portrayed as the wrongdoers. 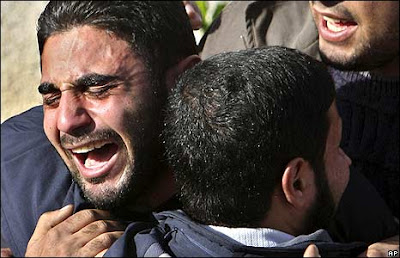