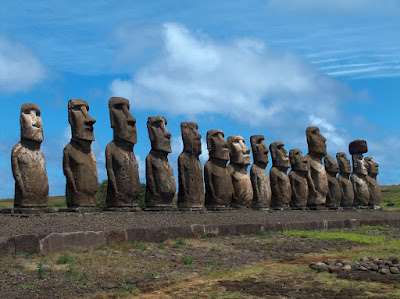 The fifteen moai on Ahu Tongariki
Regarding the moai, I am not an archaeologist, scientist or theorist - I am just a guy who took a couple of aeroplanes to see them in their proper context.

Some facts. There are in total 887 moai "statues". Eleven were pillaged and taken elsewhere - one to the British Museum. On the island, some 357 moai can be found at the Rano Raraku crater which is where 95% of the "statues" were made from a volcanic "tuff" which was carved with a variety of harder stone tools. At this amazing quarry, a lot of finished moai are standing in sandpits, presumably ready to be moved to permanent positions elsewhere on the island. Some moai are half carved and others were rejected during the manufacturing process because of faults in the "tuff".
The moai that reached their ceremonial stone platforms all faced inland. Sadly, following contact with Europeans in the mid-eighteenth century, all of these statues were toppled. It is in any case believed that the moai making period lasted from about 1250 to 1550AD so that by the time the first Europeans began to call in, Easter Island's heyday was long past. The same applies to its forests. Studying pollen evidence, scientists deduce that by 1650 virtually all the trees were gone whereas back in the thirteenth century, the evidence says that there were many trees. 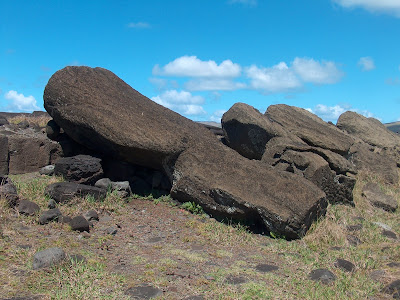 Toppled moai - these are in the majority
Whilst on the island, I of course didn't see all the moai there but I saw enough to realise that every one was different - different decorative carvings, slightly different expressions and textures, different heights and bellies. Some wore topknots or "pukao" made from red scoria stone and others didn't. The biggest moai ever moved to a platform weighed 75 tons but at the quarry there is an unfinished moai known as "El Gigante" which would have weighed an estimated 270 tons! Though there have been many theories, nobody knows for sure how the moai were moved - sometimes over ten miles.
On the day I visited Rano Raraku, there were perhaps fifty tourists keeping to the paths that weave around the moai on the crater's outer slopes. As it was mid-afternoon, the sun was in an awkward position for well-lit photography. It was a hot day and I of course had to put a knotted handkerchief on my head to avoid sunburn. This had the desired effect of driving the other visitors away because when I ventured inside the crater I was alone with older moai carved from the inner slopes. Here the light was in the right position for good photography.
A veritable herd of wild brown horses galloped into the crater and dived into the crater lake to drink and play and then they were gone leaving me alone with several moai of long ago. Their expressions were equally glum and ponderous as if they were sharing a secret, though one moai seemed to be smiling at me. I edged up to the crater's rim and looked towards the bay of Tongariki where fifteen re-erected statues look out from their "ahu" - spiritual guardians of a very different world from ours. 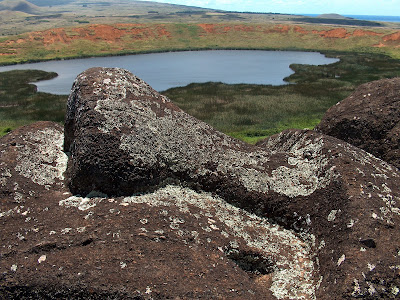 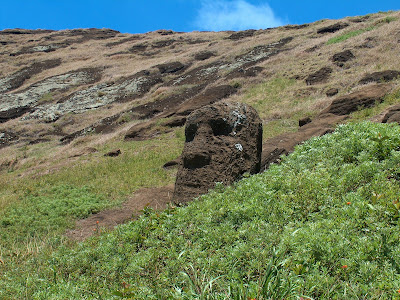 The wry smile of the Yorkshire Pudding moai