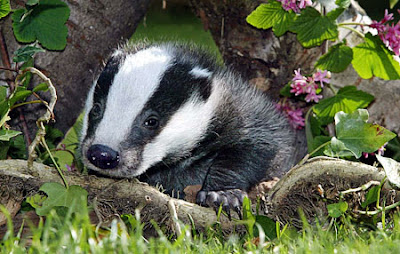 Some parts of England boast more badgers than Yorkshire can claim. There must have been more than a forty five year gap between my two sightings of live badgers in this illustrious county. I saw my first badgers when I was around twelve in a remote wood about a mile from the village where I grew up. It was dusk and they emerged almost magically from their ancient sett in a clearing.
My second badger sighting happened one night, two weeks ago, when my friend Mike and his wife Jill were driving me home. It was waddling along the pavement and at first I thought it was a dog but as we drew level with it I realised it was a badger. It scurried down somebody's driveway. Mike and Jill admitted they had never even seen a badger before.
Non-English visitors to this blog may not be aware that a debate has been sizzling in this country about the very existence of badgers. Some farmers claim, with unsubstantiated evidence, that badgers carry tuberculosis and have fatally infected hundreds, perhaps thousands of cows and bullocks. They are pushing for a widespread badger cull even though the badgers were here long before farmers came along. The Tory government, under our odious millionaire prime minister - David William Donald Cameron, are very much drawn to this brutally unscientific position.
One of our local MP's called Dennis McShane has spoken out against this murderous movement, saying: "There are tensions between any animals in their natural environment and farmers seeking to maximise profit. But David Cameron has given in to big landowners who want to create mono-agro-economies. Ministers have unleashed Badgercide to please their landowning and agro-industry friends." Personally, I think Mr McShane is right.
I was born in the countryside and worked on farms when I was a boy but I believe in badgers as much as I believe in tigers, blue whales and polar bears. They are precious and deserve our care - not bullets, traps and poisons. I say - no to the culling of badgers and yes to improving domestic animal husbandry. Up The Badgers!