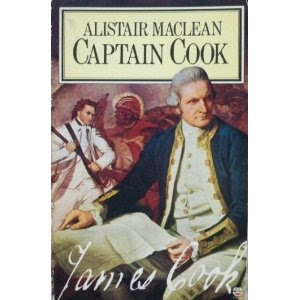 A visit to a faraway country like New Zealand is not something you file away in the back of your mind like a beach holiday in Spain. New Zealand was at the top of my "must visit" list. A special country. I knew a lot about it before I went - it's Maori heritage, its unique flora and fauna, its settlement by Europeans - mostly of British stock. And of course there was the connection with Yorkshire through master mariner Captain James Cook who circumnavigated the North and South Islands in 1769 aboard the "Endeavour" - a buoyant vessel that had once carried coal from the north east coast of England to London.

A hundred and twenty years beforehand, the Dutch "discoverer" of New Zealand - Abel Tasman had not set foot ashore, didn't realise there were two big islands and never even saw the east coast. In contrast, Cook spent six months carefully mapping the country with astonishing accuracy and made contact with Maori tribes. Sadly this involved some musket fire and killing. Scientists aboard carefully collected hundreds of previously unknown plants and  The "Endeavour" was careened in Queen Charlotte Sound. Lovely word that - isn't it - careened. It simply means that the ship was beached so that its hull could be repaired and stripped of seaweed and barnacles.

Last week through the magic of "Amazon" I acquired Alistair MacLean's affectionate, authoritative and thoroughly readable account of Cook's life and achievements as a master mariner. He was an intensely private man and little is known of his personal life or how he progressed from such obscure origins in the North Riding of Yorkshire to become England's finest seaman and arguably the greatest explorer the world has ever known. That mystery exists in spite of his copious journals which pretty much limited themselves to factual matters surrounding the weather, the ship's position, problems with supplies etc..

MacLean refers to Cook's first landfall at Gisborne. While we were there, I went to find the Cook Landing Monument. It was erected in 1906. Every New Zealand schoolchild had been invited to contribute a penny to fund its construction and the monument was duly unveiled with much pomp and ceremony. (I guess that Maori families might not have been too happy about parting with their pennies!)  Today the monument sits close to Gisborne's gluttonous timber docks and there are ugly industrial units hiding it from the sea.

Though New Zealand is growing up now, it is still very much a young country. Even America seems ancient in comparison. New Zealanders still revere Captain Cook in statues and street names and of course he supplied the country with so many of its familiar geographical names - Young Nick's Head, Poverty Bay, Bay of Plenty, Cape Turnagain, Hawke's Bay, Cape Foulwind etc.. In fact, no one who has ever lived named as many places as Captain Cook did - though admittedly  he would occasionally ignore the fact that there were many pre-existing Maori names.

Below, the unveiling of the Cook Landing Monument in 1906 and my own photo taken last month:- 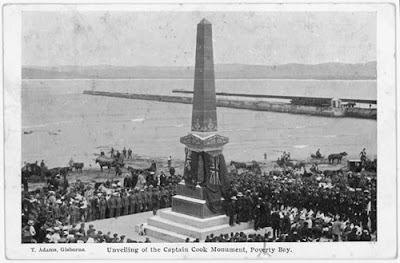 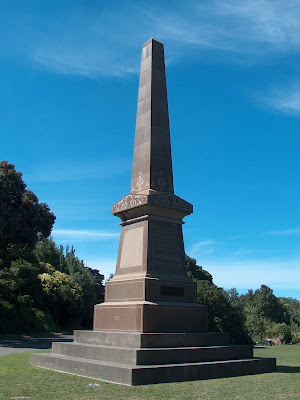