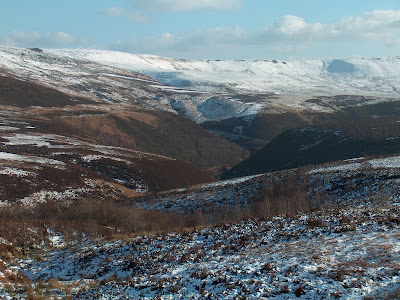 They use the word "tramping" in New Zealand but I was simply walking, high on the very backbone of England. In the image above you can see the upper valley of the River Derwent. At this point it is really just a moorland stream that burbles its way into Howden Reservoir that then cascades over a dam into the Upper Derwent Reservoir which in turn feeds the next reservoir - Ladybower. These man-made lakes supply most of South Yorkshire's water.

In Sheffield, it was mild and sunny this morning with daffodils poking through too early, unaware that winter's    hunger is not yet satisfied. But on Howden Moor the snow was six inches deep. I was wrapped up warm like an Inuit and every step was tiresome. The snow hid hollows and springs, clumps of heather and loose millstone rocks. There was no path to follow and my destination was hidden from view on the moorland plateau above me. I laboured up Horse Stone Naze and then there she was - The Horse Stone - remote and ancient, sculpted by wind and time, frost and rain, revealing millstone layers that were formed before dinosaurs tramped this land - laid down in some ancient shallow seabed, long long ago - way past our imaginings. 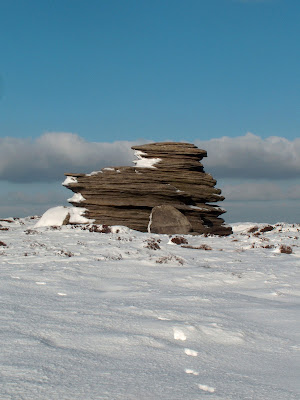 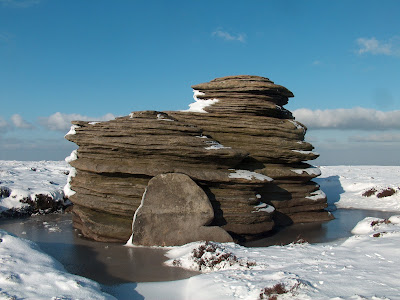 And to the east on Crow Edge, I could see The Rocking Stones but if I had also gone up there it would have been dark by the time I got back to the car. 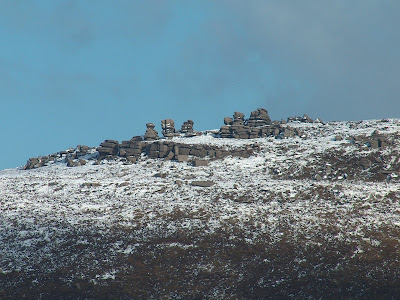 There was absolutely no one else about on those moors this afternoon. If I had fallen and injured myself, there would have been nobody to hear me yelling "Help!" or instigate a dramatic TV helicopter rescue. I'd have had to crawl into the lee of an outcrop, like the sheep do and curl up in sub-zero temperatures till tomorrow morning. That was just one of the crazy thoughts that flashed across the silver screen inside my head. And I wondered - why did they call it The Horse Stone? It doesn't look like a horse. It looks like a mega-pastrami sandwich - the sort they serve in delis in New York City... The Pastrami Stone?
- February 01, 2012