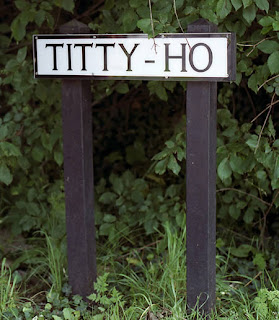 Don't you think that place names are fascinating? Sometimes the reasons for a particular place or street name are very clear and well-documented. Sheffield for example is a field by the River Sheaf and England is the land of the Angles - Germanic invaders who arrived on these shores in the post Roman period. Before they came there were various tribal areas including Mercia and Norhumbria but the word "England" did not exist.

When we were on holiday in New Zealand we visited several places that drew their names from the English aristocracy - for example Auckland after Lord Auckland the patron and former commander of  William Hobson who was the governor of the country between 1840 and 1842. In fact our hotel in the city was on Hobson Street. Maori names tend to be descriptive. For example Whakarewarewa means "gathering place for the war parties of Wahiao".

I'm getting too serious. This was meant to be a light-hearted post. I wonder how these genuine English place names were conceived -  Shitterton in Dorset, Cockup in Cumbria, Twatt in the Orkney Isles and Titty Hill in Sussex? Other countries can also claim memorable place names such as Muff in Ireland, Bald Knob in Arkansas USA and Cockburn in Western Australia.

Of course we can laugh at these bizarre names now but in the mists of time there were reasons for them. They were not affected modern choices made in committee rooms by politically correct planners but had logical roots in our earthy history. Modern street naming tends to be blander, safer as in Acacia Avenue or where one of my brothers used to live - Sweet Briar Close. How lovely! Would you rather live at that address or on Pope's Head Alley or perhaps Bummers Hill?
- February 29, 2012