Logos are all around us. You just can't miss them. Logo designs can make or break organisations. This is probably the most recognisable logo on the entire planet:-

In the 1930's, the brilliant propaganda machine that was Germany's National Socialist Party (Boo!) raided ancient Indian iconography to find this memorable spiritual logo which is now of course tainted forever:-

In Great Britain ( I never say "United Kingdom" any more) this horrible logo was dreamt up by some joker for the 2012 London Olympics. When launched, its design attracted floods of complaints and I must say it took me months to realise that the hideous logo spells out "2012" in a stylised manner:- 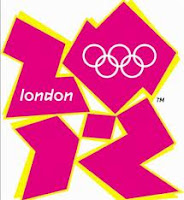 Surely one of the most effective logos of all time was created for The Brazilian Institute of Oriental Studies. Here you can see an Asian pagoda being absorbed by the setting sun. At least I think that's what it is meant to represent! You may have other ideas:-