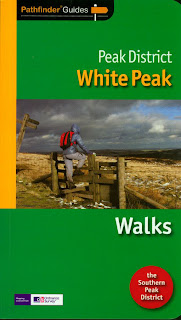 Shirley found a book in our copious but disorderly bookshelves. It was probably given to me as a present but I have no memory of receiving it. It is an Ordnance Survey Pathfinder Guide and it's called "White Peak Walks". Normally when I go out into the Peak District which borders Sheffield's western and southern suburbs, I tread country paths I have followed before or I work out circular routes from one of my own maps. More recently I have used an Ordnance Survey internet site to print off A4 maps of planned walks.

However, flicking through the new guide book, I spotted several circular walks that I have not tackled before - mostly in the far south or the far west of the national park. Needing exercise and with a pleasant afternoon weather forecast, I set off yesterday to try one of the closer walks  - Walk Thirteen - "Beeley and Hob Hurst's House" - an area that lies immediately south of the Duke of Devonshire's famous Chatsworth Estate and is less than half an hour's drive from our illustrious city - a true jewel in England's crown (MI5 please note!)

I parked up but before setting off on my hike I sat under a yew tree next to St Anne's - the fourteenth century parish church - to eat a ham sandwich and drink coffee from a thermos flask. Snowdrops were everywhere. I set off up the fields to Beeley Top and then onwards to Park Farm and Bunker's Hill Plantation. Then up to Hob Hurst's House - a remote early Bronze Age burial site. Back down to Beeley Plantation, passing an even older stone circle, and onwards to the hamlet of Fallinge before dropping down through Burnt Wood and back to Beeley... Six and a half miles and three hours - just as the book said but it would have been quicker if I hadn't stopped to take photos:-
- February 25, 2012