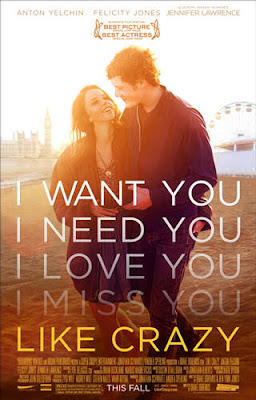 Often on a Thursday morning I walk into the city centre to take advantage of  a cinema deal for the over fifties. It's offered by our independent Showroom Cinema not far from the Midland Railway Station. For £4.50 you can have a cup of coffee, a cake and a ticket to see a current movie. Last week I saw "Like Crazy" and this week it was "Young Adult" starring the gorgeous Charlize Theron - who is also becoming a mighty fine film actress.

It feels odd being in a large audience of people who are all over fifty. I look around at the grey or dyed hair, the wrinkles, the sensible winter coats and I think to myself - these people were all young once with their lives ahead of them and now they're on the downward slope. I still can't really believe that I am one of them.

Both films have been excellent - the kind of films that absorb you - where you lose track of time and accept the illusory world that is being unpeeled on screen. Starring Anthony Yelchin and Felicity Jones. "Like Crazy" is a love story with a difference. Meeting as students in Los Angeles, Felicity's character - Anna is British and she overstays her visa limit in order to have more time with Jacob. This causes future travel difficulties that eat away at their love like dry rot. The sense of time passing in this film is expertly crafted and I enjoyed it very much.

"Young Adult" is about a Minnesotan ghost writer of "young adult" fiction. Selfish, self-absorbed and semi-alcoholic, it's as if Mavis (Theron) has never truly grown up. She returns to her hick hometown - Mercury - expecting to just pick up where she left off with her high school sweetheart - Buddy Slade. But Buddy is married now, with a new baby and he has put his high school years where they belong - in the land of memory. At first, like a spolit brat, Mavis can't accept this but there is hope for her at the end as she drives back to Minneapolis.

Why Theron's performance hasn't won her an Academy Award nomination for best actress is beyond me. If you're reading this Charlize - please call round for a cup of tea next time you're in Sheffield! Daytime would be best. The strapline for her film could be my own life motto:- 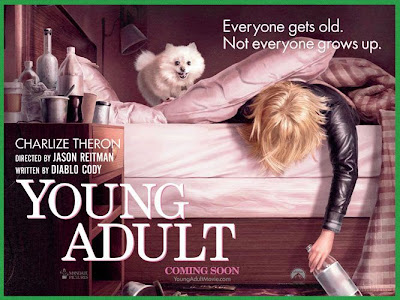