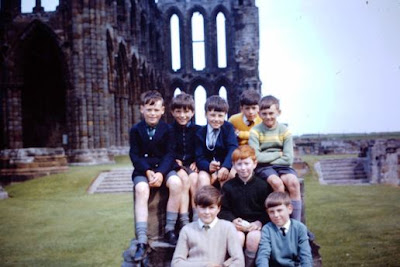 June 1965 - that's a long time ago - forty seven years in fact. Every summer older children in my village primary school looked forward to the annual "school trip". It wasn't entirely a carefree merry jaunt for there was always preparatory learning and later there were projects to complete. Setting off early, we'd tootle along in one of Frankishs' coaches for what seemed like an eternity.

I remember we went to Malham, York, Kirkham Priory and in my very last year - Junior 4 - to one of my favourite places in the entire people's republic of Yorkshire - Whitby. Above you can see me sitting  front left next to Les Watson. Between us there's red-haired Malcolm Barrass and behind him Graham Smith, then a boy I can't remember, then Dave Hartley, Peter Turpin and Richard Horsfall. The backdrop is Whitby Abbey. That summer I was the only kid in the school who passed the life-changing eleven plus exam so in September of that year I was to board the bus to school in Hull while they all went to the secondary modern school in Hornsea.

Below we're on Whitby's famous 199 steps that take you up from the harbourside to the abbey:-

Before going home we had a meal in one of Whitby's famous fish and chip restaurants. I'm back right posing for the photographer who was most certainly my father, the village school's headmaster:- 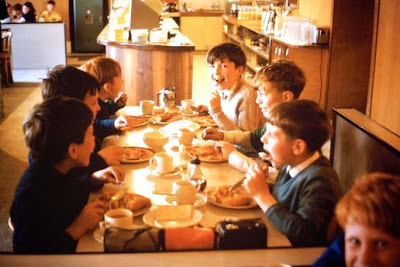 Last week on ITV they screened "56 Up", a groundbreaking TV series that has followed several English lives since the "stars" were seven years old back in 1963 - when the programme was called "7 Up". I look at those Whitby pictures now and like the ageing folk in "56 Up", I think how much the world has changed and wonder about that boy I can see - the boy who once was me. What were his dreams and if he could have looked into the future, would he have been satisfied with the twisting forty seven year long journey he was about to travel?
- June 03, 2012