Sneaking along jungle tracks in the dead of night. The killers still boozing in the social club with lights blazing and Cheryl Col's latest album blasting out of the speakers. Passing the empty wooden houses that were meant to be homes for our blogging community. The Bragues' electric golf buggy overturned. Nightbirds singing from the hibiscus groves. Orange blossom scent hanging heavy in the air.

Finally, I came to the island's only wharf. Thankfully, nobody was around. I jumped down to the beach and with dawn gloaming vaguely in the eastern skies, I found the old Rhyl lifeboat under the wooden pier:- 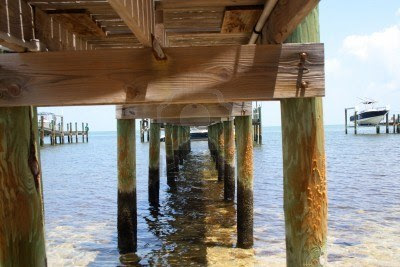 It was still under the dirty tarpaulin, hidden from view. But horror of horrors, it was deflated! Someone had slashed it with a knife or something. Fortunately, I remembered that all RNLI lifeboats are supplied with emergency kits that include repair patches and adhesive so patiently, I set about the work and after an hour, with the dawn now fully broken, the inflatable was fixed. All I had to do now was re-inflate it. Not easy! Not easy at all! It's one thing blowing up an airbed but a lifeboat! Oh my Lord, I thought my lungs would burst but finally, finally I was able to replace the plug as a little air rushed back out. 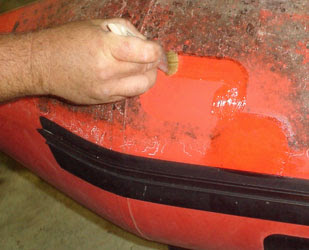 I checked the fuel level in the outboard motor. Fine. Two oars. Check. Then I sneaked to the rain-tank adjacent to the wharf and re-filled my water bottle before gathering a sack of fallen coconuts. Miraculously, a machete had been left near the water tank so I  shoved it inside the coconut sack. That's when I heard voices from the jungle path so quick as you like I slithered back under the pier and with heart thumping listened to the voices of the bad men above me. Of course, I don't speak Burmese but the word "pudding" was used several times and once it was followed by a gob of phlegm which landed on the sand close to my hiding place.


They went away and after waiting a few minutes, quietly and very cautiously I hauled the lifeboat down towards the incoming tide. How can an inflatable boat be so heavy? I guess the outboard motor didn't help! But eventually, it was in the water.

I pulled the starter cord on the motor. It spluttered to life and then coughed, dead. I tried again and that's when I heard the murderous voices of the Burmese lynchmob rushing back from the forest. One more pull. I adjusted the choke and the motor surged into life.

I sped away from the pier with the Burmese killing crew yelling and leaping up and down in frustration. I couldn't resist slowing down for a moment  so that I could turn back and goad them to distraction. Standing in the craft I gave them the two fingered salute with both hands as I ad-libbed a football chant - "One Yorkshire Pudding! There's only one Yorkshire Pudding!". Then I was off, speeding cross the gentle Andaman to the wide blue yonder...
- June 21, 2012