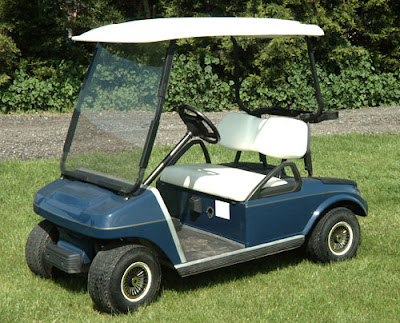 The Blogland Procurement Council purchased a Club Car golf buggy, anticipating that it would be useful to more senior bloggers. As you will appreciate, there are no cars here and the council recognised that older bloggers - not used to walking - could potentially become prisoners in their own homes. The council was especially concerned about the impending arrival of Mr and Mrs Brague from The Peach State and had planned to park the aforementioned vehicle under their Balinese-style beach property. 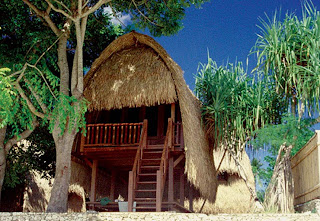 It's less than a quarter of a mile from the Bragues' residence to our social club and though it's not marked on the map, a wide paved path was constructed specially to allow the Bragues to travel in the electric golf buggy between their residence and the social club - where several bottles of "Wild Turkey" bourbon remain behind the bar earmarked exclusively for Mr Brague.

Since Katherine deChevalle left to pursue her artistic career back in New Zealand, I have come to accept that I may always be alone here - the only Blogland passport holder in the world. Though I have dismissed several slaves members of the Burmese support staff, the population still seems to be enlarging and I have been powerless to prevent poor Burmese families arriving from the mainland to occupy several of the designer homes intended for western immigrants.


The golf buggy is redundant so it is available for sale while still in A1 condition. Shipping will be included in the successful bid price. I decided to sell it through this blog rather than resort to e-bay. Please place your bids in the "Comments" section and explain how you wish to use the buggy should your bid be successful.
- June 07, 2012