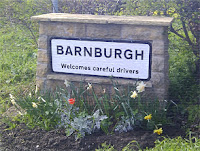 Barnburgh is a charming village that sits in a sort of post-industrial no-man's land between Barnsley and Doncaster. Between 1911 and 1989, like many villages in the Dearne Valley, it boasted a productive coal mine - that was until Maggie Thatcher wielded her axe and "took on" the nation's miners, later spitefully and stupidly shutting down nearly all that remained of South Yorkshire's coal industry.

However, long before deep mining was dreamt of a village existed at Barnburgh  and the surrounding area hides tantalising glimpses of a history that reaches way back to the Romans and beyond. Geographically, the settlement is situated beneath a dry magnesian limestone ridge and must have once looked down on marshy uninhabitable "ings" or water meadows where the Dearne river meandered its way to the River Don.

A great medieval house once stood in the village. It was bought by the Coal Board and was called Barnburgh Hall. They demolished it in 1969, claiming that the main building was suffering from mining subsidence. Perhaps it was. Now all that remains is a listed sixteenth century dovecote that may have accommodated up to two thousand birds. Its honey-coloured stone was undoubtedly quarried from Banburgh Cliffs, hidden in woods half a mile to the north.

The ordnance survey map of the area shows a track called St Helen's Lane which leads past the remains of St Helen's Chapel. This is situated in a small copse but there's very little to see - just a few stones in the undergrowth. I suspect that the small religious building that stood in that place was put there because the site had older pre-Christian significance and was probably dedicated to Ellen - a pagan goddess often associated with water sources. During the establishment of Christianity in Yorkshire, the church would frequently latch on to special pagan sites no doubt finding such connections useful when trying to win over wavering peasants whose ancestors had been pagan for millennia. Those old beliefs were part of their DNA.

In the British Isles, evidence of what once was is everywhere -  though many people fail to notice it or just don't care. But me - I cherish physical echoes of the past and feel a warm glow whenever I strengthen recognition that the life I am living is just a small jigsaw piece in the broad sweep of history. Even a forgotten place like Barnburgh and its surrounds can give you that feeling.
- June 16, 2012