Sticky Toffee has found the last few days in northern England rather frustrating because of the inclement weather and he has struggled to get out in the countryside - to indulge in his current favourite hobbies - map reading, walking and photography. However, on Sunday afternoon he spotted a window of opportunity and drove to the hamlet of Sugworth, a few miles west of Sheffield for a nice long ramble.

In 1927, during The Great Depression, wealthy civil engineer and road builder Charles Boot had this tower constructed just to keep a gang of his men occupied. It is known as Boot's Folly and popular with sheltering sheep. The wooden staircase inside is ruined and you'd need a helicopter or extremely long stilts to get to the viewing platform on the top:- 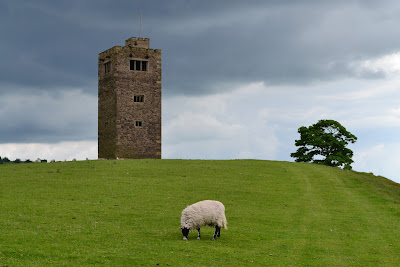 Like me, Sticky Toffee is also drawn to ruins. There something melancholic about a lonely ruin and if you stop to listen carefully you can hear the echoes of long deceased occupants. This is on Ughill Moors above the hamlet of Moscar:- 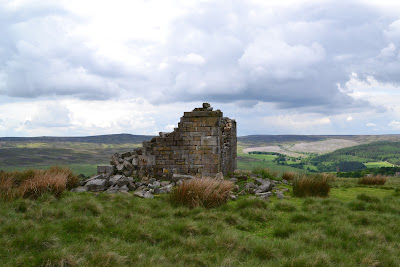 And here's another ruin - in Bradfield Dale. The neglected house plant inside has evidently burst through the slate roof:- 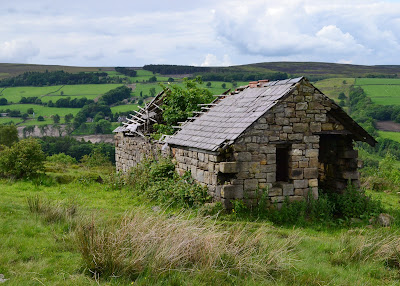 Sugworth Hall is a very old manor house on the edge of the moors and round about it there are lots of rhododendron bushes. In fact, at one point the public footpath goes through what you might call a rhododendron tunnel and when you emerge you see this:- 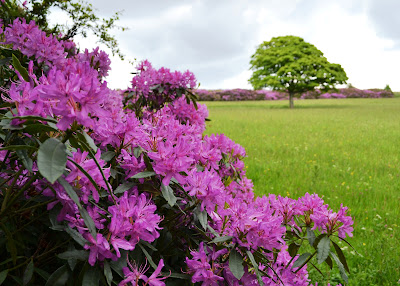 Here in Blogland I sometimes dream of country walks I went on in the past. England offers an infinite number of wonderful, varied paths and if you study maps you can often devise circular routes that are rarely trodden. In Blogland it's hot and when I do walk, it's mostly to the social club or down to the beach. Sticky Toffee's pictures make me feel nostalgic and not a little envious. What I'd give to pull on a pair of walking boots, grab a map and simply stroll along singing:-
I love to go a-wandering,
Along the mountain track,
And as I go, I love to sing,
My knapsack on my back.