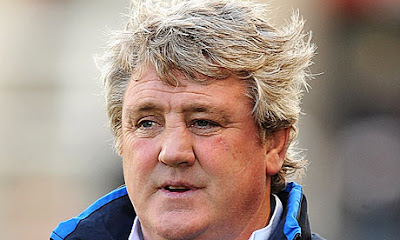 Today was the day when my beloved Hull City A.F.C. revealed their new team manager. He's the vastly experienced Steve Bruce who has flitted around from club to club like a gipsy selling clothes pegs. There he is above. His dashing good looks have won him several lucrative modelling contracts in the past.

I know that regular readers of this humble blog are equally passionate about football. For example, Jenny is fanatical about Wrexham F.C. and Arctic Fox sports Huddersfield Town pyjamas in the wintertime. Jan Blawat in California is a closet Rotherham United fan while Mr Brague prefers Bradford City. I can testify that New Zealander Katherine flies a Newcastle United flag above her historic Tauranga home while Daphne of Leeds was once arrested for fighting outside the Elland Road Stadium. When Helen and Tony visit England from Oz their main objective is always to take in a few Derby County matches. Naturally, Earl John Gray favours both Brighton and Shrewsbury Town. Only Mr Parrots-Rhodes from Manchester's dark underbelly seems anti-football - as he follows Manchester United.

We finished a creditable eighth in The Championship last season, so Bruce has a genuine chance to bring The Tigers up to The Premiership again in his first season. That is what the Egyptian owners of the club will expect and no doubt they are giving their new man substantial funds to help him to achieve that goal. Appointing him is a statement of real intent and shows genuine ambition. I just hope that Bruce is up to the job and won't let our long-suffering fans down by jumping ship when a better job offer appears.

His daughter, Amy, aged twenty five, has been the subject of several nasty paparazzi hunts in the past. For a while, there was speculation about her physical appearance and these were two cruel mock-ups:- 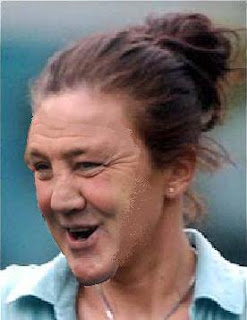 Actually, I think these photo-shopped beauties resemble typical female bloggers. I mean, looking like that it's surely safer to stay indoors tapping away at a computer keyboard than to risk the testosterone-fuelled attentions of anonymous mail suitors.

So next season it will be Steve Bruce's Black and Amber Army - as we do battle with the likes of Bangkok Booth's Sheffield Wednesday, Bolton Wanderers and Middlesborough. Up The Tigers!
- June 08, 2012