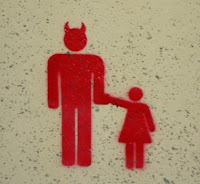 I know nothing about paedophilia and if you are expecting a blogpost all about paedophilia then you will be sorely disappointed. The only reason I have titled this post "Paedophilia" is to test the water re. my blog statistics. Up until now, and rather bizarrely, my most popular posts of all time have been one titled "Chavs" that I made in September 2009  and another called "Desman" that I wrote quite recently on the subject of a little known aquatic mammal called the Pyrenean desman.

It is my expectation that out there in the world at large there will be people - some of them sick in the head -who are curious about paedophilia and they will be sitting in their ghettoes, mud huts or penthouse suites tapping away at their computers trying to find out more. Consequently, this will become my all time most popular blogpost and I will be the envy of my middle-aged blogging peer group - from Canton,  Georgia to Darkest Angola and from Wrexham, Wales to Brisbane, Australia.

I prefer the archaic spelling of the word - "paedophilia" - rather than the sloppy Americanised version - "pedophilia" which could easily be confused with the feet - as in "pedometer". Picking out the Greek roots of the word it literally means παῖς (child) φιλία (friendly love) -i.e. friendly love of children but of course the modern definition has an entirely sexual focus and even the word "paedophilia" has become like an alarm bell ringing - so much so that I expect an angry mob with burning torches to mill around our house before this week ends, simply because I dared to utter the word - "paedophilia". By the way, the story about a paediatric doctor in South Wales being murdered by an a vengeful and linguistically challenged mob is purely an urban myth.

P.S. If any paedophiles or would-be paedophiles are reading this, my considered advice to you is to get some professional counselling. The innocence of childhood is something that deserves respect and no adult has the right to scar a child's life forever.
- September 12, 2012