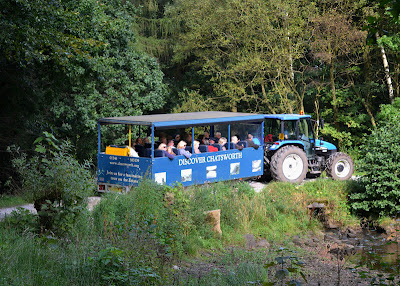 The rain that began mid-afternoon yesterday continues to patter on the flat roof above our study. Why didn't I light the garden bonfire before this drenching, before greyness covered the city and the sodden streets  were made shiny with wetness?

I could have struck the match on Saturday when the weather was gorgeous and the prunings and clippings and sycamore branches were almost bone dry... but instead I was out walking again having declined the opportunity to go to Leeds with Shirley for a shopping expedition with Princess Frances - our darling daughter. To me shopping expeditions are on a par with visiting the dentist and Maths lessons of yore.

When thinking of a new walk, hidden cogs whirr in my brain and soon I focus on a particular area before planning a route with the assistance of Ordnance Survey's "Get A Map". Then I'm off. Of course, I have been to the Chatsworth Estate many  times before but it is a huge area of land and it's only twenty minutes from our hovel so that's where I decided to go on Saturday.

I parked in the village of Baslow - home to England's former cricket captain Michael Vaughan - and set off southwards towards Chatsworth House. Apart from the ostentatious stately home built for the Dukes of Devonshire, the estate contains a surprising number of cottages and farms. There are streams and lakes, follies and fountains, formal and informal gardens, woods, sheep pastures and even a nine hole golf course and a cricket ground - 35,000 acres in total.

As it was a sunny Saturday, there were many cars parked up by the grand house and the huge former stable block. Parking costs £3 per vehicle and there must have been a thousand cars there Not bad work if you can get it! Of course, the majority of visitors would have been paying to go inside the stately home and its gardens or scoffing posh nosh in the stable block or wasting money in the gift shops but I was going up into the woods and out into the countryside. I climbed four hundred feet to Bess of Hardwick's sixteenth century hunting tower and then passed The Emperor Lake which feeds the famous Emperor Fountain before reaching The Swiss Lake.

Out of the woods and into the sheep country then back down to Dobb Edge and along to The Jubilee Stone and the grand gatehouses by the ornate north entrance that is closed to visitors. I followed the path back to Plantation House and the kissing gate that leads back to Baslow. Another really lovely three hour walk but now the huge bonfire pile is saturated. Shirley just phoned to say there's a power cut at her health centre and she may need me to bring her a big jumper as the heating has been off for an hour now. Such an inconvenience rarely happens these days. For your interest, snaps from Saturday's walk:-
- September 24, 2012