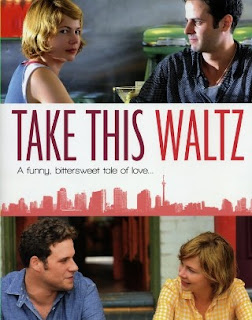 Last week I went to the cinema to watch "Take This Waltz", directed by Sarah Polley and starring Michelle Williams, Seth Rogen and Luke Kirby in a kind of love triangle. Another "character" in the film is the bohemian district of Toronto in which the film is set. Before deciding to part with cash for the ticket, I checked out a few reviews of this film. If I'd accepted Peter Bradshaw's take on it, I wouldn't have bothered:-

It is drenched in a choking, twee whimsy and supercilious indie blandness; everything about it, from the torpid performances to the soft-late-summer-glow cinematography, creates something stifling. It's all the more bizarre because what the film is supposed to be about is marital discontent and sexual tension, but the latter quality is quite absent from this weirdly bloodless, passionless film. - Peter Bradshaw in "The Guardian"

But Philip French's review was much more encouraging:_


Take This Waltz is so truthful and honest a film that on the rare occasions it hits a false note or becomes over-explicit or sentimental, it really jars. Like the Cohen song, Polley's movie touches on familiar feelings and evokes common experiences in a way that goes beyond what can be explained or paraphrased. - Philip French in "the Observer"

It is quite astonishing that two highbrow film buffs'opinions could be so very far apart.

A few aspects of "Take This Waltz" were irritating but essentially I enjoyed it. It's a languid, domestic movie in which the central character - Margot - finds it difficult to accept the ordinariness of everyday life with her loving husband of five years - Lou. Her head is in the clouds and she's gradually drawn away by the romantic dream that Daniel seems to offer.

I liked the pace of this film and I liked the fact that it seemed to suggest various questions about everyday life compared with the possibility of escape to a tantalising other world. I don't think I have ever before watched a film set in Toronto and this Canadian city made for a refreshingly different backdrop.

I don't know how you feel about watching sex scenes in films but often I think they are unnecessary. After all, in ordinary life, sexual relations are usually conducted in private so why did we have to ogle at Margot and Daniel copulating in their loft apartment while we listened to Leonard Cohen singing "Take This Waltz"?And why did we have to see Margot and the rest of her aqua-robic class stark naked in the showers? Again - most unnecessary. Suggestiveness is often more effective.

But as I said before, I enjoyed this film. In spite of its essentially serious core theme it had several funny  tension-relieving moments. Michelle Williams is an accomplished film actress and Rogen and Kirby provided excellent support. Certainly a very different experience from the last film I saw - "Ted".
- September 02, 2012