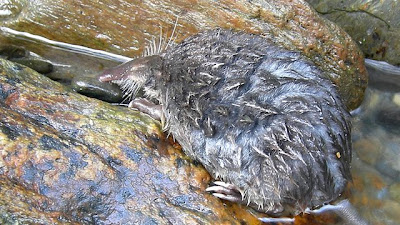 Named after the place of its home, the Pyrenean desman is a small aquatic insectivore closely related to moles, also known as the Iberian desman . This adept swimmer has many adaptations to its aquatic habitat, including an elongated head and body with a long tail, webbed, paddle-like hindfeet, and the ability to close both ears and nostrils to prevent water getting in. In contrast to moles, which have powerful digging front legs, desmans have powerful hind legs that are longer than the forefeet to help propel them through the water. The tail is also slightly flattened vertically, acting as a rudder and helping to steer and direct the animal as it swims. A double layer of fine dark greyish-brown fur includes a dense waterproof underfur and oily guard hairs. The eyes are tiny and eyesight is poor, but the long, black, almost hairless snout is highly sensitive and used to locate prey. The extremely rare desman lives at an altitude of 2200m spending most of its nocturnal waking time in the clear crystal mountain streams that descend from the Pyrenees.