Certain famous people remind me of animals. I am sorry to non-British visitors because you'll probably not be aware of my three example celebrities. Here is our odious Health Secretary - Jeremy Hunt - who seems intent on doing all he can to undermine the good work of the National Health Service and to besmear its good reputation. I would happily dunk this lizard's head down a lavatory bowl and flush it:- 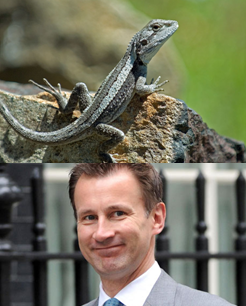 And here's somebody I often wake up to courtesy of BBC Radio 4. It's the veteran broadcaster John Humphrys. He is so articulate and so skilled in the art of interviewing. It is great when he corners a smug politician and digs for the truth. He really is like a dog with a bone and he is somebody I greatly admire even though he is Welsh:- 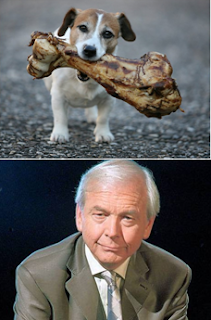 BBC newscaster Kate Silverton is like Bambi's mother. Behind her trademark spectacles, her doleful eyes look sweetly, almost invitingly at the entire (panting) heterosexual male population of the British Isles. Like John Humphrys she is also a skilled interviewer but her technique is less rabid, more seductive:- 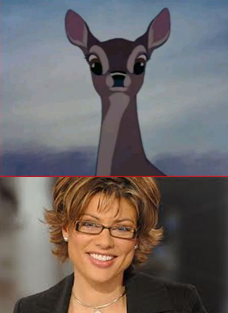 Other examples could have been plucked from the world of blogging. For example, Mr R. Brague reminds me of a bald eagle soaring in the sky, looking down upon the Earth while Helen in Brisbane reminds me of a cuddly koala bear, lazing in a eucalyptus tree. And Cap'n Tom Gowans in Angola reminds me of a ferret, sniffing this and that, running along connecting drainpipes and then popping his head out where you least expect it.

Are there any famous or non-famous people out there who remind you of animals?
- September 10, 2013