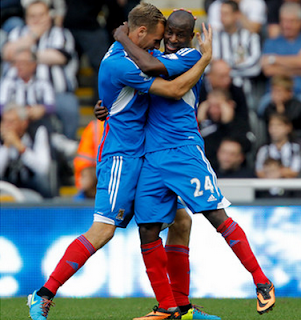 Grrrrr! is the sound that tigers make before they pounce and yesterday - in front of 51,000 supporters at St James's Park in Newcastle - my beloved Hull City A.F.C. - The Tigers - secured an unlikely victory with goals from Robbie Brady, Ahmed Elmohamady and Sone Aluko. Above, in a balletic pose, David Meyler congratulates Aluko whose superb first time volley sealed our famous victory.

Now I am aware that many bloggers out there in the blogosphere are not big followers of football so let me fill you in. My team was formed in 1905 and it took over a hundred years before we finally arrived in the top flight of English football. In 2010 we were relegated but this year - under the wise management of Steve Bruce and our wealthy new owners - the Allam family - we are back in The Premiership. The start has been encouraging but our target must still simply be to stay in this division.

Financially we are like David competing with Goliath teams such as Manchester United, Arsenal, Liverpool and even yesterday's opponents - Newcastle United. These teams all have single players who cost more to buy than our entire squad. So to go up to Newcastle and win by three goals to two is something of a minor miracle and testament to our team's self-belief and togetherness.

Dear friend, if you don't have a favourite English football team, may I invite you to become an honorary Hull City supporter? Who knows, if you get hooked, you may even decide to  purchase merchandise from Tiger Leisure such as the Roary the Tiger keyring. How have you lived thus far without one? 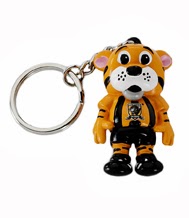