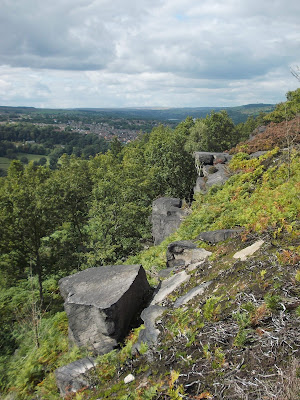 This is the best picture I snapped on Saturday - at Wharncliffe Crags looking northwards to Deepcar and Stocksbridge. It's about six miles out of Sheffield. The name Wharncliffe evolved from the term “quern cliff” because as far back as the Iron Age "querns" were shaped here and then transported to farms and villages throughout the region. Literally thousands of finished and unfinished querns have been found in the locality.

What is a quern? -  I hear you asking. It was essentially a rounded stone with a depression in the middle. Using a hand-stone or later a clever rotary stone mounted on a wooden handle,  you ground your grain in the middle of the quern to produce a rough and ready flour.

The quern on the right  was found at Burton Agnes in East Yorkshire but is now kept in The British Museum in London. It dates from around 350 B.C.. Querns could come in slightly different shapes and sizes. It is hard for modern people to appreciate how much this simple piece of technology meant to our ancestors. It was widely used for hundreds of years and only a few sites in the north of England offered the sort of stone that was best suited to quern production. Wharncliffe was one of the very best.
- September 15, 2013