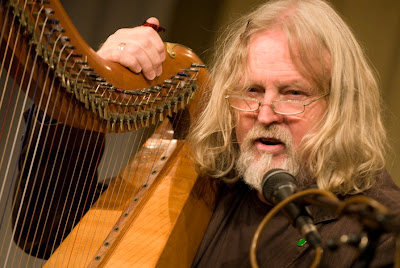 Last night I walked up to "The Greystones" pub with its "Backroom" concert venue and waited for Robin Williamson to take the stage. I first saw him when I was seventeen and he was the creative leader of The Incredible String Band. Last night there were about a hundred aficionados in the "Backroom", mostly badly groomed sixty and seventy somethings - for Robin himself is now in his seventieth year.

More than half of his songs and stories happen to the accompaniment of the Celtic harp which he plays with nimble passion. Otherwise, half-crouched behind the harp he plays his acoustic guitar in a skilfully idiosyncratic manner that has been fashioned through fifty long years as a troubadour. The songs are interspersed with gentle chit-chat and oddly amusing tales such as the time he was in Nashville, Tennessee.

Arriving in the marbled foyer of his hotel, in his softly lilting Scottish accent, he repeatedly asked the stogie-smoking black manager who was sitting in a green leatherette armchair if he could leave the heavy case for his Celtic harp in a store room and he'd take the harp itself up to his room to practise upon. Still chewing and puffing on his cigar butt, the manager appeared baffled so he asked Robin's tall Texan agent - "What he say?". The Texan translated the request. "Well why didn't he say that?" and the request was fulfilled.

And then he moved into "October Song" - the only recognisable Incredible String Band number of the night. It was a song which Bob Dylan once described as "all right" - a point that has clearly tickled Robin through the tears. He played an "all right" Dylan number and then delivered a memorable version of "Wild Horses". He kept losing picks and plectrums and his voice soared and quivered enigmatically. He was a bumbling granddad in his lumberjack overshirt and his maroon jeans.

And though he is very much an acquired taste, he is someone who has remained true to his art his whole adult life. Still making music and I'm glad I went along though it is unlikely I shall ever see him play live again:-
- September 19, 2013