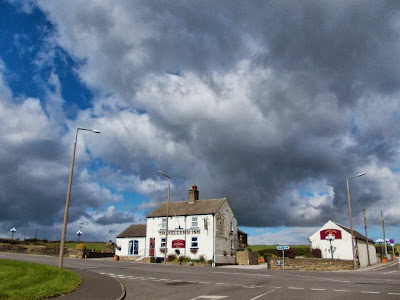 More walking. Twice this week I have visited a bleak and hilly area north of Sheffield and along the road I had to pass this isolated pub called "The Travellers Inn". Once it would have catered for coach travel - I mean teams of horses and coach travellers - when the miles passed far more slowly than they do today.

I have rambled round Ingbirchworth, Denby Dale, Upper Denby, Lower Denby, Skelmanthorpe, Bagden Hall and to me the best name of all - Nether End. Nether End - like the end of the world. The word also appears within Sheffield's suburbs - Nether Green and Nether Edge. Both of our children were born at Nether Edge when the maternity hospital still stood there. Now it's a campus of luxury flats - a gated community - keeping the rest of the world out. The idea of living in such an exclusive "community" appals me.

A little etymological research tells me that the prefix "nether" means "under" or "lower" - like one's nether regions - somewhat hidden from view. "Denby" was once a "Settlement of the Danes" - harking back to the years - after the Roman occupation - when Yorkshire was invaded by Vikings and other Norsemen. Many Yorkshire place names and family names - including my own - can be traced back to those early Danish settlers. Even the name York sprang from its Viking name - Jorvik.

It was good to be out in the wind today, under scudding clouds, plodding along unfamiliar paths. You never know what you might see or when you might encounter a yapping pampered canine or even genuine wildlife. As I descended to a silvery pool in the babbling River Dearne - under a leafy canopy - an alarmed  heron flapped its way out of the trees and later a covey of grouse were equally startled - their clucking song resounding along the hedgerows as they left.

Then back past "The Travellers Inn" to Sheffield where I went straight to "Carpet Right" to purchase enough cheap carpet to cover a bedroom floor at our son's house. I have been decorating that room this week and had to admit that the carpet was gross and really needed replacing. I have also bought some new curtains as a previous tenant had roughly sliced the excess bottom inches off the old curtains with a pair of scissors, leaving ragged threads behind. The good thing about cheap carpets is that they tend to be thin so they're quite easy to cut. Fitting it myself will save £60.