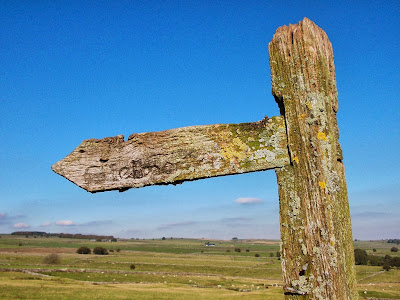 In northern England, autumn was stopped in its tracks yesterday. Cobalt blue skies and sharp sunshine with a balmy temperature that meant coats were once again redundant. The last rallying cry of summer. And naturally I had to get out with a map, walking boots and Shirley's little Nikon Coolpix camera.

I headed for the hamlet of Pomeroy which is on the old Roman road that leads from Ashbourne to Buxton. Parking opposite "The Duke of York" pub, I was soon marching along the High Peak Trail to Dowlow and then onwards past the voracious limestone works to Sterndale Moor. The afternoon light was gorgeous and the meadows were thick with lush green grass - testament to the wonderful summer we have enjoyed this year. A summer of summers.
Then up towards Nether Low. In Derbyshire, the word "low" often indicates an ancient burial mound and indeed when Nether Low was excavated rather amateurishly in the middle of the nineteenth century, Bronze Age bones, metal implements and jewellery were discovered here. It is a place that sings quietly of past times and how we used to be.
The view over Chelmorton was dreamlike. Sleeping beneath Chelmorton Low, the limestone village is redolent with echoes of its medieval significance - a small market town made wealthy by the wool industry. But yesterday I turned at the nearby crossroads and headed up across fields to Highstool Lane. Evidence of former lead mine workings could be seen in the land's bumps and hollows. I paused to take several pictures of a simple wooden signpost that has endured endless seasons of changing weather high on those uplands.
Onwards to beautiful Flagg and then across more thick meadows towards Pasture Barn. I hoped to find it sitting sweetly behind a small copse but in spite of what my map said,  it wasn't there! In recent times it must have been demolished - probably by the landowner. It is a sad loss. I love the isolated limestone barns and farm buildings of the Peak District. They speak to us of distant times and deserve to be preserved as long as possible - not crushed to bits.

Back at Pomeroy, "The Duke of York" was now closed because of a mysterious "problem in the kitchen". I drove on to another isolated roadside pub that is over five hundred years old and called rather sweetly - "The Bull-i'-th'-Thorn" but by then it was past five o'clock and time  to head back to Sheffield via Monyash, Bakewell and Calver - a journey illuminated in brilliant technicolour. I couldn't have wasted an afternoon like that. Such beauty.
- September 23, 2013