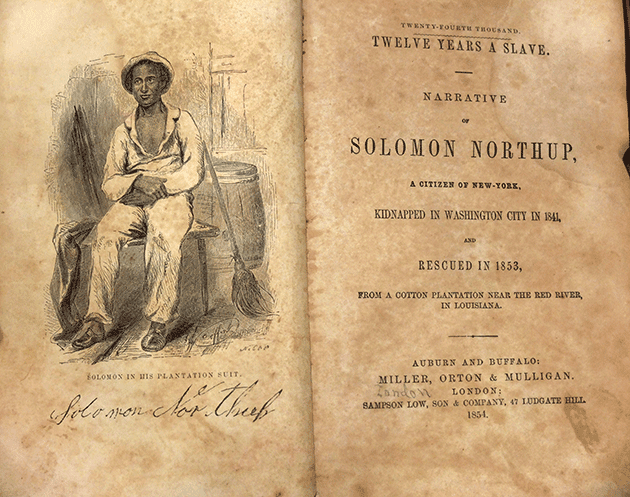 Yesterday I finished reading  "Twelve Years a Slave" by Solomon Northup. Published in 1853, it is of course the text that inspired the blockbuster film of the same name directed by Steve McQueen. In the middle of the nineteenth century it was a bestseller - especially in the northeastern states of America. It gave a rare insider's view of what it meant to be an Afro-American slave and in its small way helped to fuel some of the North-South animosity that led to the American Civil War (1861-65).

Though the text is now over a hundred and fifty years old, it was surprisingly easy to read. There was a clarity and purposefulness about the writing - avoiding the syntactical tangles that will sometimes characterise Victorian writing.
Though Northup's principal "master" was the cruel, ignorant and boorish Edwin Epps - owner of a small Louisiana cotton plantation - he made a point of alluding to other slave "owners" and incidental white men who displayed humanity and kindness in their dealings with slaves. On Epps's property, whippings were a daily occurrence.

Sometimes Epps would visit the local town for recreation, returning late at night drunk as a lord. It amused him enormously to rouse his sleeping slaves and bring them into the big house in order to dance while Northup played tunes on the  violin. Early the next morning - woe betide any slaves who weren't at their duties on time. They'd still be lashed mercilessly.

Here's a taste of Northup's writing and of the desperation he felt in his seemingly hopeless situation:-

“Oh! How heavily the weight of slavery pressed upon me then. I must toil day after day, endure abuse and taunts and scoffs, sleep on the hard ground, live on the coarsest fare, and not only this, but live the slave of a blood-seeking wretch, of whom I must stand henceforth in continued fear and dread. Why had I not died in my young years-before God had given me children to love and live for? What unhappiness and suffering and sorrow it would have prevented. I sighed for liberty; but the bondsman's chain was round me, and could not be shaken off. I could only gaze wistfully towards the North, and think of the thousands of miles that stretched between me and the soil of freedom, over which a black freeman may not pass.”

Ultimately, Northup owed his liberation to a passing Canadian carpenter called Bass who agreed to forward letters to influential men back in New York State - where the author had been a free man. Finally, he got home to his family.

Back in the northern states, Northup became something of a celebrity - speaking to many audiences about the ills of slavery. Nonetheless, his whereabouts beyond 1860 are sadly unknown. There's no gravestone - just a book and now a film to remember him by.
- March 01, 2014