Aquae Arnematiae - The Spa of the Goddess of the Grove - that's how the Romans knew Buxton. Several roads led there and it was a place where Roman soldiers and merchants could acquire some well-earned rest and recuperation. Their veneration of water sources intermingled with the myths and legends of local inhabitants - a creed that pre-dated Christianity by millennia.

Yesterday, I parked in the hamlet of Cowdale to the east of Buxton - in high limestone country. Just to the north of this village there's a deep cleft in the earth where the River Wye runs eastwards to Miller's Dale, Ashford and Bakewell. Cowdale has no services, no shops or churches, no village hall - just this largely redundant phone kiosk:- 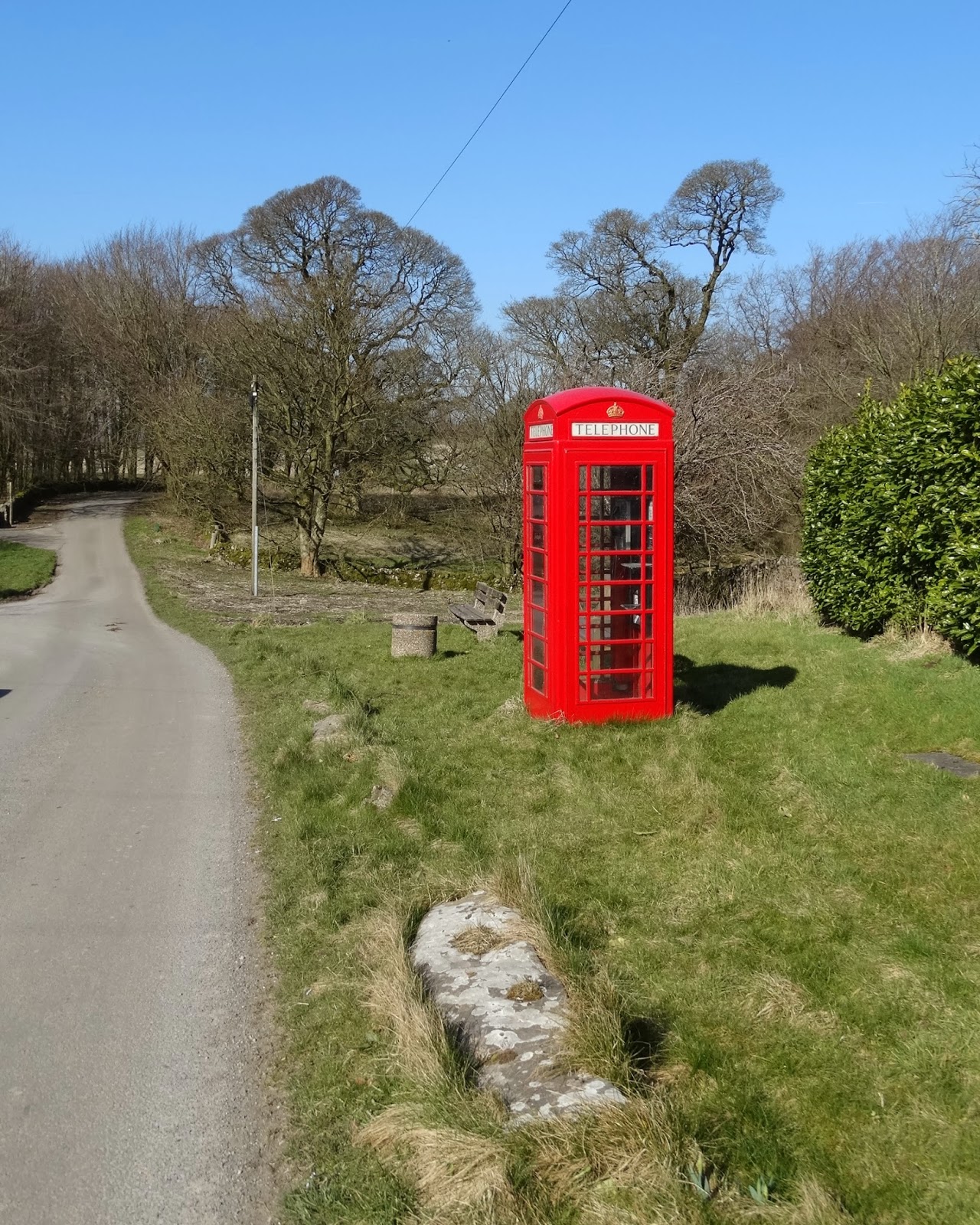 And then in the lovely spring sunshine, I struck out across the fields to the charming hamlet of King Sterndale. Christ Church is not as old as it looks. It was built in the middle of the nineteenth century and funded mostly by the Pickford family - later famous for removals and haulage:- 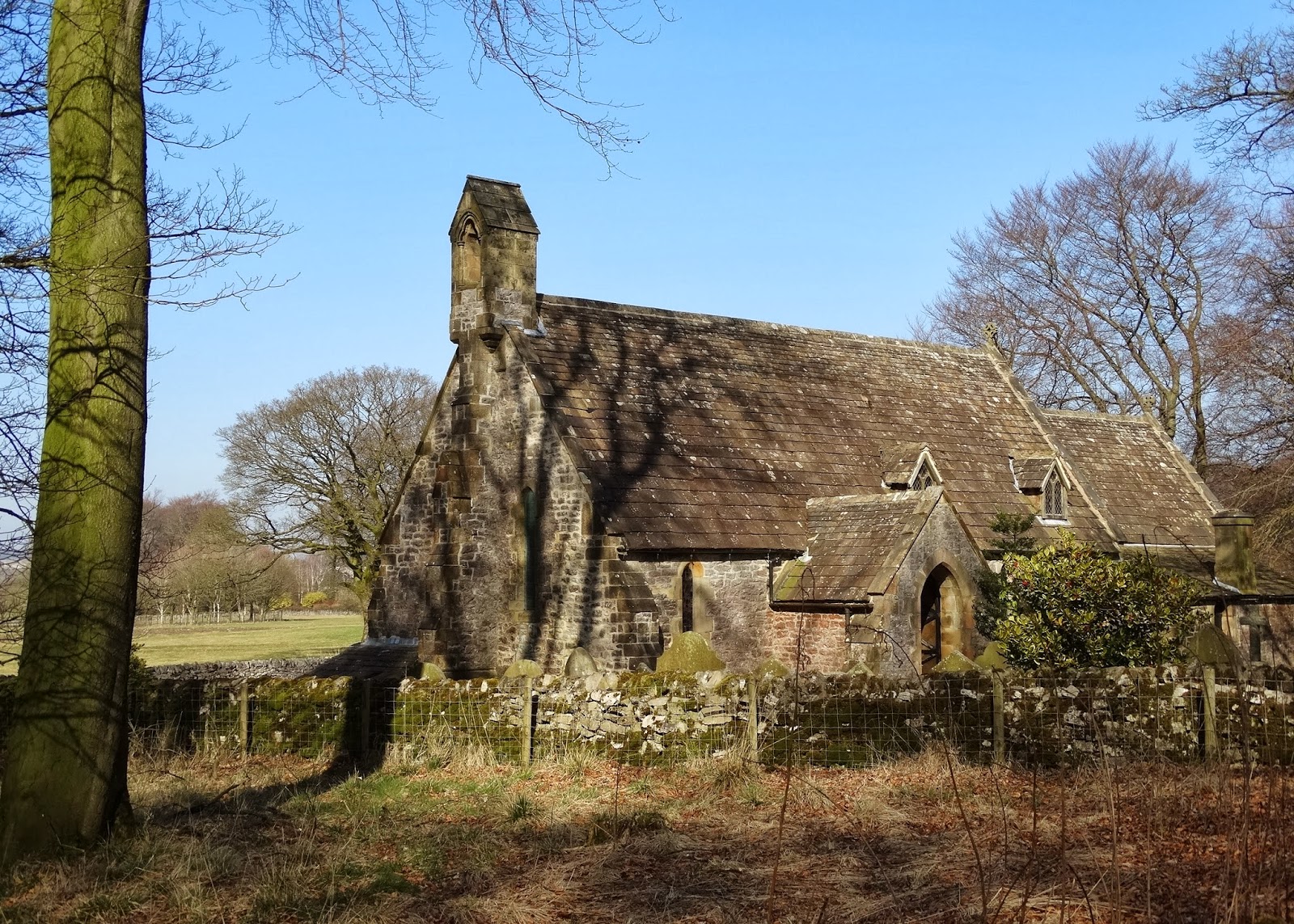 Inside the unlocked church I prayed to The Goddess of the Grove:- 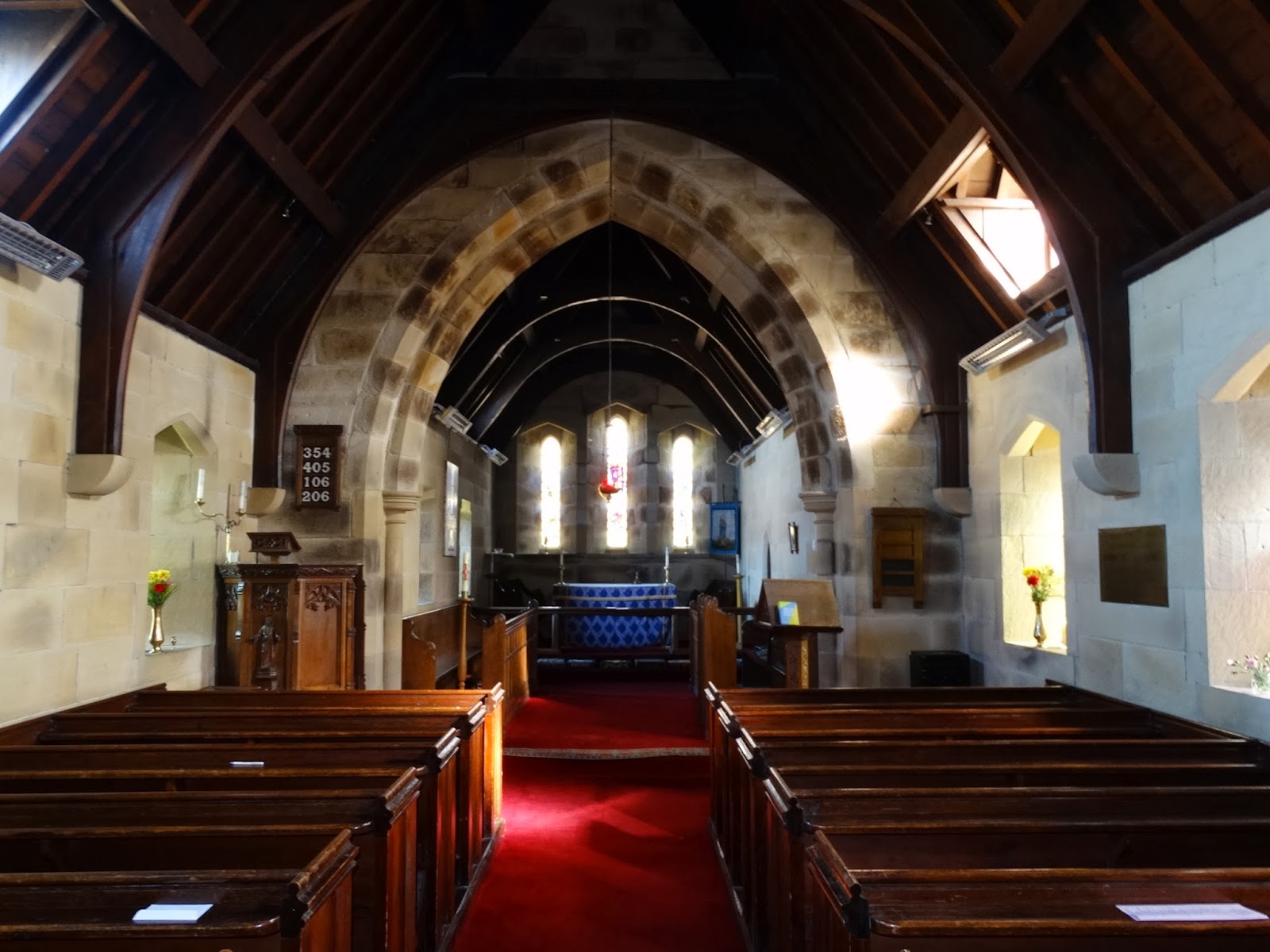 Down to the Wye Valley via a precipitous path and then up the other side via the oddly named Woo Dale. At Lowfoot Farm this brown and white horse positively galloped across the paddock when he saw me entering it on the public footpath. Seeing a ton of horsemeat thundering towards you can cause your heart to miss a beat but fortunately he put the brakes or horseshoes on at the last moment then nudged me towards the exit - over the limestone wall- where he appeared to  laugh at me like a latter day Mr Ed:- 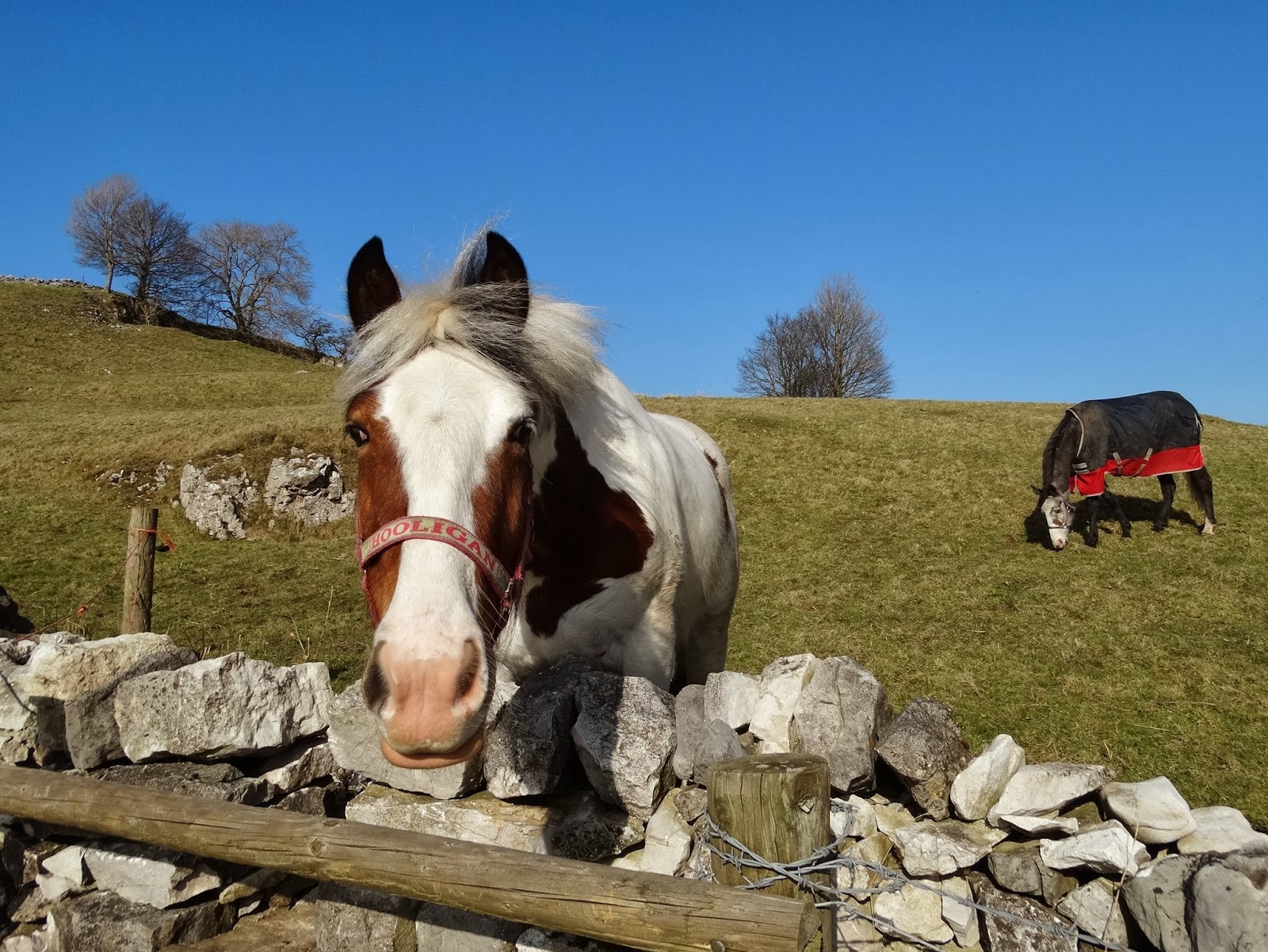 Up to The High Peak Golf Course and into the suburbs of Buxton - an unappealing estate of modest social housing. Its hostlery - "The Royal Foresters" is yet another English pub that has shut its doors forever. I bought a pint of milk in the 7-11 minimarket and in honour of Earl Gray of Trelawnyd secured a reduced price scotch egg. Then back down to the Wye Valley and up the other side to Staden and over the fields to Cowdale. But before I got back there I snapped this smiling ewe with her hungry new lambs - tails wagging madly:- 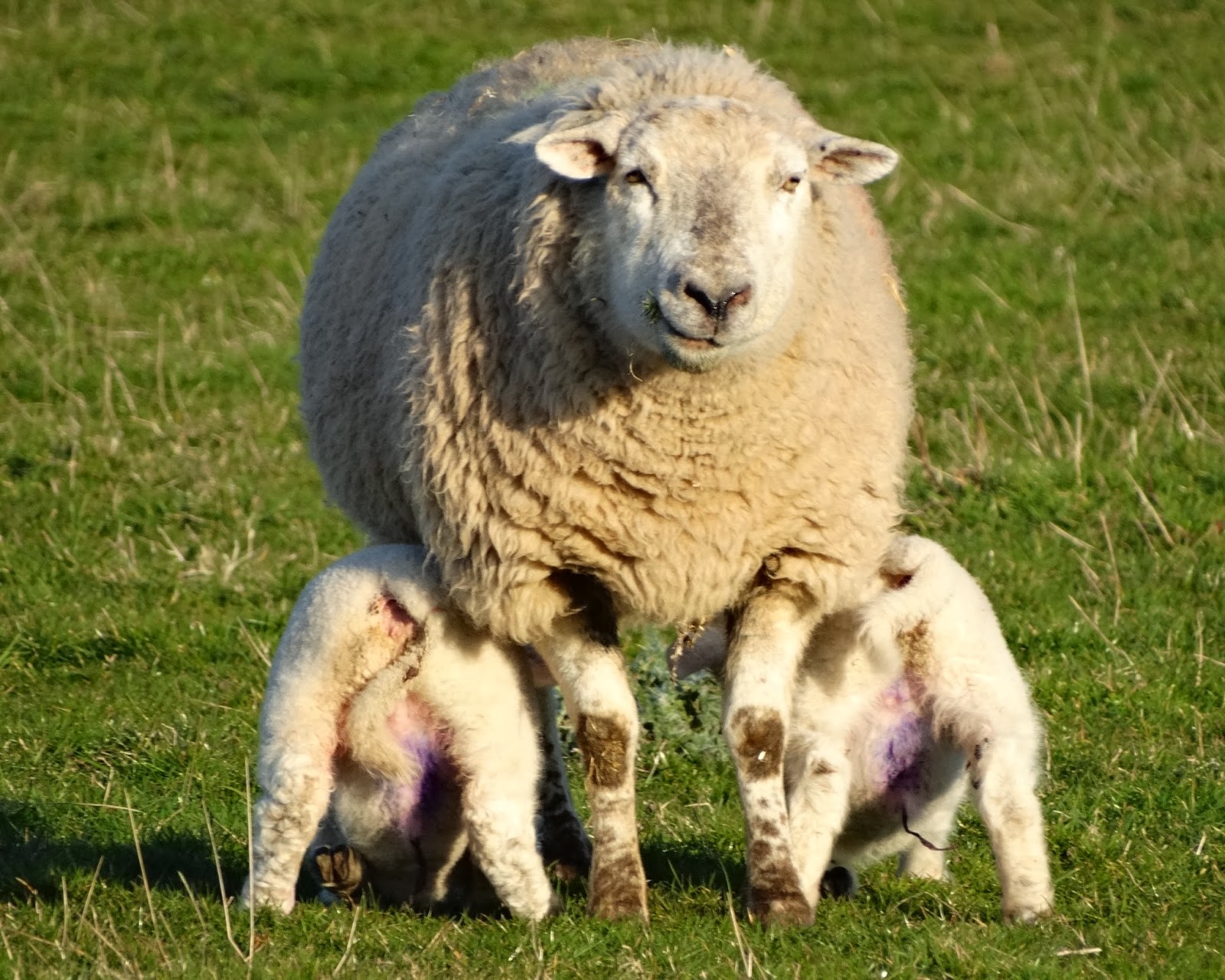 Slightly shitty lamb bottoms are perhaps not as cute as their innocent little  faces. The front one is called Adrian and the naughty one behind is of course... Bob:-
- March 13, 2014