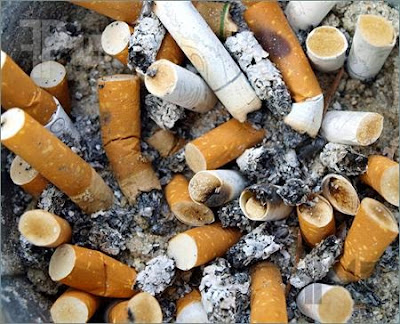 This morning I had to take my car across the city to Middlewood Road, Hillsborough. That's where the "Seat" dealer is located. And as Hector - my trusty steed will be at the garage most of the day, I had to make my way back to Pudding Towers by bus.

Riding back, I was struck by the number of people I saw standing around outside shops, businesses and office buildings. They were talking with colleagues in huddles or fiddling with their damnable mobile phones or simply in awkward poses watching the traffic go by. Oh,, and I forgot one other thing - these sad people were all smoking cigarettes!

Surprising as it might seem, the author of these words was himself once a smoker. "Benson and Hedges" in golden packets was my drug of choice though in America I smoked "True Blue",  in Greece "Karelia" and in France - "Gitanes". I had a twenty a day habit - sometimes more. Pints of beer were accompanied by cigarettes in smoky pubs and the day couldn't start without my first fag (apologies to American visitors for using that last word!).

So I know all about the smoking habit. But thankfully  I gave up forever in 1988 just before my beloved daughter was born and I haven't had a single cigarette since. And now for all smoking bloggers out there I would like to help you by presenting you with The Yorkshire Pudding Guide to Giving Up Smoking. It doesn't involve any nicotine patches or nicotine chewing gum. No hypnotherapy or self-help information packs, No counselling sessions and certainly none of those execrable "e-cigarettes" that are quite prevalent these days - promoted by unscrupulous entrepreneurs solely to make money.

Giving up smoking makes sense for lots of reasons:-
a) Smoking makes you stink like an ashtray - the stale odour is in your hair and on your clothes. It hangs about you like a fart that won't go away even though you can't smell it.
b) It can cause lung cancer and heart disease.
c) It costs a lot of money that could be spent on better things.
d) It makes you breathless so climbing up hills or staircases becomes a struggle.
e) It makes you step out of work places or social venues to smoke with the other addicts instead of getting on with work or the social event you have just left.
f) Smoking causes many house fires and road accidents.
g) So  much money you spend on cigarettes goes to the government - like a voluntary extra tax. Why give them more of your hard-earned cash than you have to?
h) Much of the money you spend supports the greedy and very cunning tobacco industry.
i)  Through the vast majority of human history people haven't smoked - it's a very modern habit.


So now to The Yorkshire Pudding Guide to Giving Up Smoking.
Are you stinky smokers ready for it? You will be surprised to discover that there are just two steps:-

As those irritating meerkats might say - "Simples!" There are two important supplementary points to my master plan. Firstly - Do you really, really, really want to give up or are you kind of pretending you want to kick the habit? Secondly - giving up means just that - no "reward" cigarettes. Tell yourself - "I am now a non-smoker" and mean it! No vaporising e-cigarettes, no more links with the old habit - "I am a non-smoker". No turning back. If you do turn back and succumb to the dreaded weed once more then that is the proof that you were just pretending in the first place. But don't worry. Learn from your failure and after a couple of weeks try again but this time  with 100% determination. Thousands and thousands of others have succeeded and you my friend can also do it!

Remember my plan. In the words of John Lennon - "It's easy if you try". 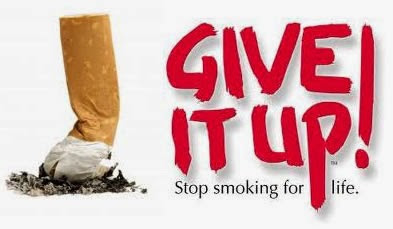