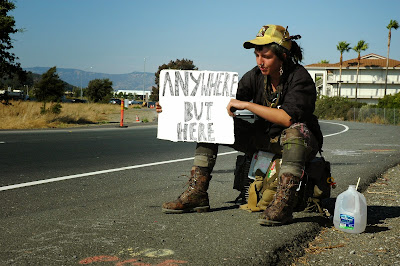 In my salad days, I travelled many hundreds of miles free of charge. I stuck out my thumb and almost magically, vehicles pulled in to pick me up. Actually, it was rarely as simple as that. Often I would have to wait ages for a "ride" like the desperate chap in the picture above.

Hitchhiking out of London back to the fair land of UpNorth was always a challenge but my late and much missed brother Paul taught me what to do. You had to catch the tube to Finchley North and then jump on a particular London bus that took you very close to Junction 1 of the M1 motorway. Then after waiting on the slip road for a short while you'd be on your way out of The Smoke and back to reality.

I hitchhiked long distances - up to Inverness and to The Isle of Mull, all the way round Ireland and across to Wales. Being at university in Scotland meant I would often hitchhike up and down from Yorkshire - saving train fares and making a little money at the same time for in those days students could claim back from the local council the equivalent of three return rail fares a year.

You never knew who would pick you up. It was all so beautifully random. Lorry drivers were a favourite. Their employers hadn't thought about anti-hitchhiker regulations or insurance restrictions and many men liked to have somebody to chat with  to help the tedious miles pass by.

I could tell you a lot about hitchhiking techniques and share stories of especially kind drivers who bought me meals or went out of their way to drop me off at more convenient places or about "rides" I had in America, Iceland, France and even Easter Island where some drunken Rapa Nui natives took me across the island in a battered old Toyota that had no seats in the back - just a big brown dog called Felix who stared at me as if I were a tasty carcass. And there was that single woman by the roadside in Glencoe, Scotland with a cardboard sign that said "No Fleas!" where you might have expected "Edinburgh" or "John o' Groats".

In contrast, my son Ian has had virtually no experience of hitchhiking. It is a different world these days and you just don't see anything like the number of hitchhikers you used to do. Apart from anything else, drivers have become afraid of strangers. Hitchhikers might rob you, steal your car, engage you in unwanted sexual activity or grab the steering wheel and force the vehicle off the road. Such is the mythology. Stranger danger. As a society, we used to be so much more open and trusting.

Anyway, in the summer of 2004 Ian and I flew over to Ireland to see Paul and his family in County Clare. I had a hire car and one sunny afternoon after a trip to Galway City, just outside the village of Kilcolgan we saw an older man with his thumb out by the side of the road. I quickly assessed him -as you do - and he looked fine - a good candidate for a free lift . I guess I thought it would show Ian some of the beauty of hitchhiking - people helping one another out. Random strangers.

As soon as this grey-haired fellow got in the car I whispered "Oh no!" to myself. He was as drunk as a Tory MP after day of  grouse shooting. Pissed as a newt and angry with it. Coming from deep in the bogland of western Ireland his speech would have been hard enough to decipher at the best of times but now it was all slurred so it sounded like a foreign language. He was speaking Guinnessish.

We were just taking him back to his home on the outskirts of Ballyvaughan - ten mile away. It should have been easy but he wanted to make an argument of it and the fact that we were English seemed to wind him up no end. But this wasn't the worst of it.

The fellow's non-hitchhiking hand was bleeding. It was wrapped in reams of toilet paper and through his jumble of indecipherable utterances I worked out that he had been in a fight in a pub in Kilcolgan. He kept putting his bloody left mitt on Ian's front seat and the head rest too. Ian was leaning forward, slightly petrified by the beer monster in the back. I think he was called Paddy.

It was an enormous relief when we dropped Paddy off and drove away. There was so much blood on Ian's seat that he got in the back. Fortunately, when we got back to Paul's house we were able to clean the blood off. The upholstery must have been protected with some kind of spray guard. I think the incident will have put Ian off ever picking up a hitchhiker in the future. Not quite what my spur of the moment act of kindness as meant to achieve.