DIY. Not Lady Diana, The Queen of Hearts but DIY as in Do It Yourself.


This semi-detached house we inhabit in the south western suburbs of Sheffield was built in 1925. It may have been the first owner who had an obsession with embedding old bricks and stones in the garden. I have dug up hundreds of them over the years.

But just beyond our decking, there was a strip of the garden that I had never properly tackled. Grass had overgrown what had once been a rough little path. I could tell this simply by pronging my garden fork down to the hard stuff that lay just beneath the surface. It was in my mind to do something about this area last summer but I had a knee injury and it wouldn't have been wise to do too much kneeling.

However, recently I have been feeling as fit as a butcher's dog - no knee problems - and with oodles of motivation in my fuel tank, I felt ready to begin the little garden project.

With the aid of a pick axe and sledge hammer, I removed all the stones from beneath the surface. To be carried away, a few of them would have needed two men. Lord knows what they once were but the cut marks speak of far distant times. Stone endures and it tends to get recycled so that if they could speak old stones would have fascinating stories to tell. Those stones I lifted will still be going strong long after we have all passed away.

Anyway, back to practical matters. With the stones all gone I set about laying a new path with block paving stones that I had had delivered from Paget's builder's yard on Broadfield Road. As our ground is clay rich, I didn't bother with a gravel and sand bed for the pavers. They are quite heavy  and after removing the turf,  I just butted them up against each other in a kind of jigsaw. making sure they were as level as possible. 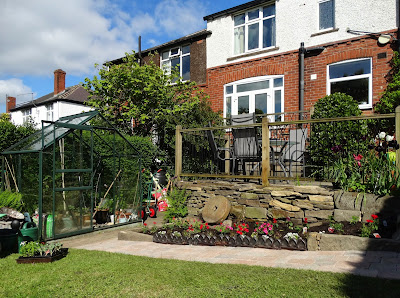 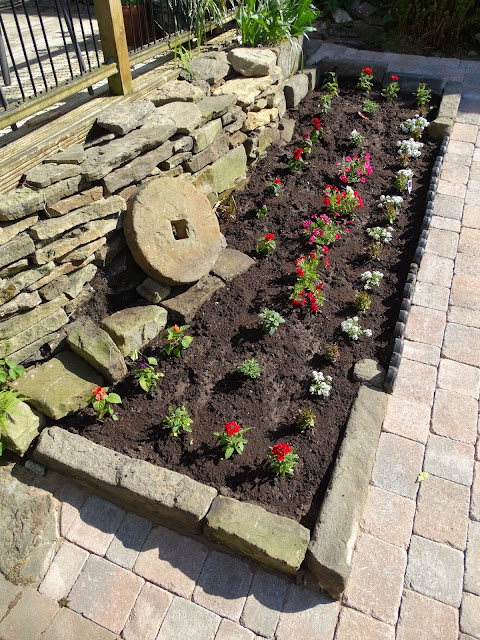 Then I set about building a little soil retaining wall using some of the stones I had dug up and also eight Victorian edging stones that I liberated from my son's house near to the Sheffield United football ground. I also had to shift a heavy stone trough that came from Holme Farm in Gunthorpe, Lincolnshire. That was where Shirley grew up and where her father and grandfather farmed all their lives. I also made a little stone shelf for an old grindstone that I found when I kept an allotment on Hagg Hill by Rivelin Valley Road - years ago.

I rebuilt the drystone wall beneath the decking and dug over the earth that had lain beneath the buried stones. Then I forked in a couple of sacks of compost before spreading four bags of topsoil over the surface.

Now after numerous sessions of labour over a period of two weeks, we were ready for the proverbial icing on the cake. Yesterday afternoon, we drove up to Bent's Green Nursery where Shirley and Frances - who was home for the weekend - picked various bedding plants to go in what is now a sunny new flower border. Last night I was still planting up at nine o'clock and this morning I watered the new plants in. By May 26th the danger of late frosts is almost certainly gone. We are on the very verge of summer.

It's nice to have a vision of something and then to see it through to completion. I know my little DIY project is not going to make it into the pages of any glossy garden magazines. Nor do I expect a visit from Prince Charles any time soon. What I did may appear unexceptional but it has improved our tiny bit of the planet and  having done it all by myself, I am pleased as punch with the end result.
- May 26, 2015