The weather forecasters got it right on Tuesday afternoon. Grey skies gave way to sunshine. After visiting my desperate friend Higgy to deliver eight cans of "Red Stripe" lager and a "Guardian" newspaper, I set off for the Derbyshire village of Grindleford - just six miles from home. It was 5pm when I got there. 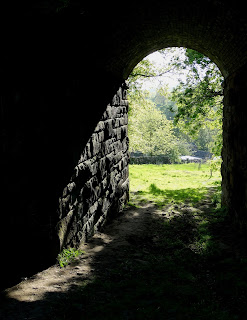 I parked up in the recreation ground car park, donned my trusty boots and crossed the village's old stone bridge over The River Derwent. Then keeping to the river bank, I set off along the edge of sheep pastures to Coppice Wood. The lambs are growing fat now as they munch on sweet spring grass.

In Coppice Wood I reached a junction of paths and headed up towards Grindleford Station. Just after the railway bridge I saw a wonderful carpet of bluebells in ground that must have been cleared a couple of years back. This was on the edge of Rough Wood which was magical in the late afternoon sunshine. The six o'clock train from Hathersage flashed past on the nearby track - heading to Sheffield via Totley Tunnel.

Then I turned left on the path that leads to Kettle House where a white horse and a little black one were feeding on a bundle of dry hay that their owner had just delivered. Back under the Hope Valley railway line and along to a farmhouse called Harper Lees. But no mockingbirds there. Some sheep were using an old stone gatepost as a scratching place. It must be infuriating not having fingers to scratch with.

Then along through more sheep pastures and back to Coppice Wood. Along the riverside I noticed pied wagtails flitting from rock to rock and a yellowy coloured bird that I couldn't immediately identify and there were wild ducks too - swimming against the current.

Back through the pastures to Grindleford. A two and a half hour ramble punctuated only by photo opportunities and by the time I got back to Sheffield, Shirley was still not home from her "super late" shift at the medical centre. I am finding that if I don't get regular walks in, it's like missing a "fix" so the Grindleford walk was probably essential for my spiritual well-being as I hadn't been out and about since last Thursday when I wandered around Darfield, Thurnscoe and Great Houghton - once the very heart of The South Yorkshire Coalfield.
- May 28, 2015