Occasionally, I look at the statistics that clever Professor Blogger gathers about this blog. Here you can see this month's "pageviews"  top ten - showing countries inhabited by discerning visitors  to "Yorkshire Pudding":- 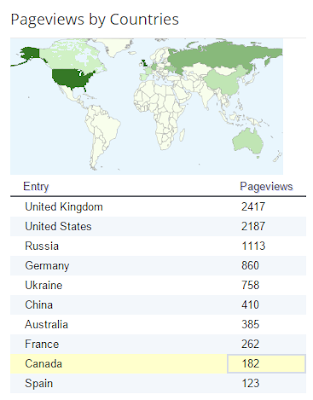 Unsurprisingly the so-called "United Kingdom" is in top place, closely followed by The United States where my nemesis dwells in the heart of Georgia. No doubt two thousand of those visits are down to him alone. I am also not surprised to see Germany, Australia and Canada in my top ten as visitors from those fine nations have, in drunken stupors, often left comments.

However, what I do find surprising is the number of hits I get from Russia and Ukraine. Nobody from either of these wonderful countries has ever left a comment or indicated that they were following this blog. 1113 Russian visitors and 758 from Ukraine this past month and that volume is not unusual.

Through this post I wish to extend a hand of friendship to all my hitherto silent Russian and Ukrainian visitors in the hope that they will reveal themselves to the blogosphere. So to all Russians out there I say:-

And to all Ukrainian visitors I say:-

For those who are not fluent in Russian and Ukrainian, the message was "Hello Russians/Ukrainians! Do not be afraid. Please leave a comment."


Who knows, if Russian and Ukrainian comments start to flood in. The United Nations might one day employ me as a mediator to sort out the Ukrainian conflict that appears to be boring Western media channels to death. It's still there but I would need a posse of bodyguards and a villa with swimming pool in the suburbs of Kiev. I could arm-wrestle with Mr Putin or pin him down and mercilessly tickle his armpits saying "I'll not stop till you've pulled your men out of Ukrainian territory!" He'd be laughing so much he'd surely wee his pants.