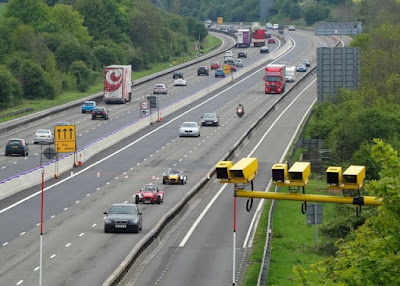 Once more unto the breach! The M1 motorway is the spinal cord of England's road system. When it opened in the late nineteen fifties, families would occasionally get out of their cars and picnic on the road's grassy embankments. That was in a time of innocence when traffic was very light.

Nowadays, convoys of monstrous lorries trundle up and down the lanes sandwiching endless shoals of cars and vans. Some of us are going south and some are going north. There are endless roadworks, variable speed cameras, accidents, mysterious traffic jams caused by congestion, sirens and idiot drivers on mobile phones. It is not a pleasant way to spend your time - especially on dark December nights with the windscreen wipers swishing.

We went up and down the M1 last weekend and we're doing it again this weekend. Shirley is taking her pair of golden tickets for the "Strictly Come Dancing" final down to Elstree Studios in Borehamwood. We are going to stay in the nearby Ibis Hotel and she will join the ticket validation queue at five o' clock in the morning with her deckchair, blanket and flask. What a crazy and extremely unkind process!

Let's hope she is successful. The Princess Frances will arrive in Borehamwood later in the day as I set off to watch Borehamwood F.C. take on Barrow in the English National League - not a military skirmish but a football match.

And then on Sunday, it's back up the M1 again. The road is usually quieter on a Sunday with fewer big lorries but you still have to have your wits about you and at the end of the tension-packed journey you have to prise your white knuckles from the steering wheel. Someone should write a song about it "...and I was only twenty four minutes from Luton, a half  hour away from your heart..."

We set off from Sheffield at 2.40 in the afternoon and arrived at our hotel at 8.15 in the evening. Five an a half hours for what should have been a two and a half hour drive. Motorway signs advised us that the motorway was closed because of an "incident" between junctions 25 and 26, not far from Trowell Services. Like everybody else we had to leave the motorway and work out a detour, through Eastwood, Heanor, Ilkeston and the western suburbs of Nottingham. It seems a mad man had been on the loose. He killed his wife and then went on a driving rampage along the motorway which resulted in his death. The full details are still emerging.

It is half past midnight. Shirley is sound asleep. I have just been over to the TV studios' rear entrance where four brave souls are already camped out for the night - more than eight hours before the ticket validation process begins.
- December 16, 2016