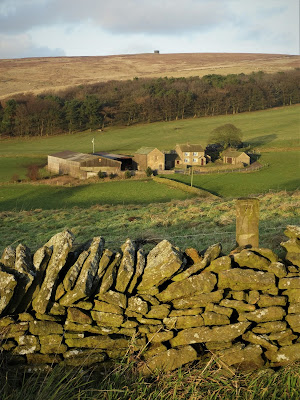 Unusually for 2016, no famous people died on Boxing Day. Consequently, I thought it would not be too disrespectful to treat myself to a two hour country walk west of Castleton. I  dropped our son Ian off near Hathersage where he had arranged to meet up with an old friend before travelling out of The Hope Valley and along Rushup Edge towards Chapel-en-le-Frith.

Though bright, the day was windy and cold. Fortunately I had brought along my fashionable red thermal hat, fingerless gloves and my Hull City manager's coat. I must have looked a "right div". That's a slang term derived from prison life. Apparently low status prisoners of the past found themselves putting cardboard dividers in boxes so they became "divs" - now used as a term of mild abuse for stupid or stupid looking people.

Anyway, when suitably attired I plodded along a track that leads eventually to a hill called South Head which you can see in the picture below. The light was sharp and beautiful and I snapped more than forty photographs on the walk but I have only picked two to share with you.

The picture at the top is of Bettfield Farm - an upland sheep farm. On the horizon you can see the head of a railway shaft which ventilates The Cowburn Tunnel. This connects Edale with Chinley and is just over two miles in length. I have travelled through it several times for it is on the most direct rail track between Sheffield and Manchester..

The days remain short and though I would have loved to walk an extra three miles as planned, I decided it was wiser to curtail my route in order to avoid  tramping across sheep pastures in darkness. Never a good idea. Isn't it always best to see where you are going? 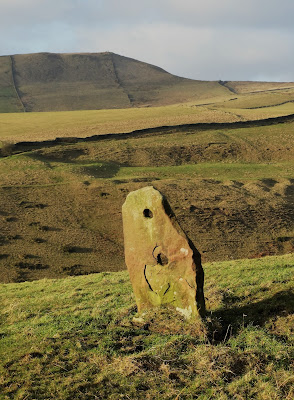