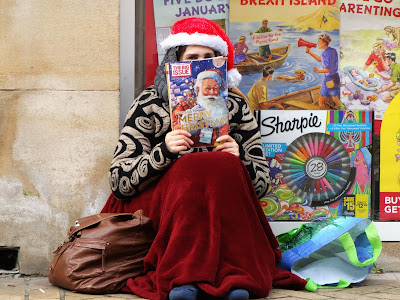 We returned from "Strictly Come Dancing" via The Great North Road - otherwise known as the A1. Until the M1 motorway was constructed in the late nineteen fifties, the A1 was England's premier north-south arterial road. The journey home was swift and untroubled - so different from Friday afternoon's tortuous trip.

We decided to make a short detour to a Lincolnshire town we had never visited before - Stamford, And what a lovely place it seemed to us with its many limestone buildings, its riverside setting and its various churches. 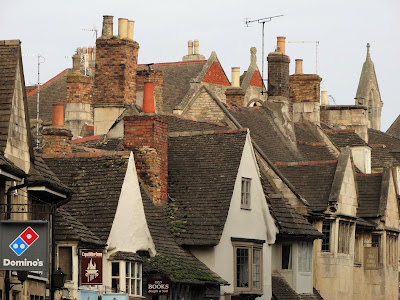 After parking "Clint", we wandered around and noticed how many independent shops there were in the town centre. It seemed affluent and confident - not dog-eared or sadly reflective of better times. A soprano carol singer stood in front of a gift shop, gathering change for her chosen charity.

Outside W.H.Smiths, a cheerful Romanian "Big Issue" seller maintained her happy refrain of "Merry Christmas Everybody! Have a nice day everybody!" I tried to snap her with my camera from across the street but she spotted me and raised her Christmas edition of the homeless magazine to hide her face. I suspect that Stamford is a rather nice town to be homeless in. In 2013 it was adjudged, in all of England,  to  be the best place to live by "The Sunday Times". 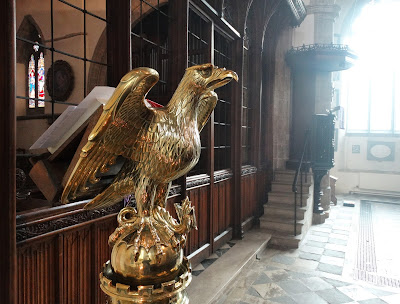 There's a lot of history in Stamford and it is a shame we had so little time there. In the old Sheep Market there was a tall spire made of limestone and bronze. Researching it later, I discovered that it had been erected in 2008 to commemorate the fact that Stamford was once home to one of the twelve Queen Eleanor crosses. 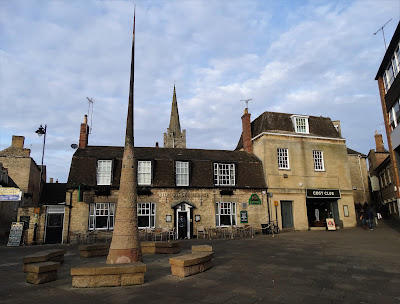 They were erected under the instructions of King Edward I after his late wife's embalmed body was, in 1290,  moved from Lincoln to London in twelve stages. The twelve crosses signified the nightly stopping places of the funeral procession with the last one being Charing Cross in London.

Noticing a parking enforcement officer snooping around Stamford's riverside car park, we unlocked "Clint" and sped off  back towards The Great North Road, pausing only at the gate to Burghley House to take off our coats. 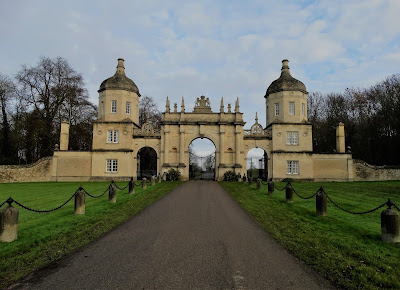