It's nice to share photographs with blog visitors. Some of you have  occasionally written complimentary comments about them. Such words are much appreciated. Sharing pictures is more motivational than saving them for my eyes only. If nobody else saw them, what would be the point?

Here are three more pictures, taken in the last three days. Below you can see an ancient squeeze stile I came across when walking between two farms in north east Derbyshire. The squeeze stile remains when the hedge or stone wall in which it once sat disappeared. long ago. The squeeze stile allowed people to squeeze through to the next field but not livestock. 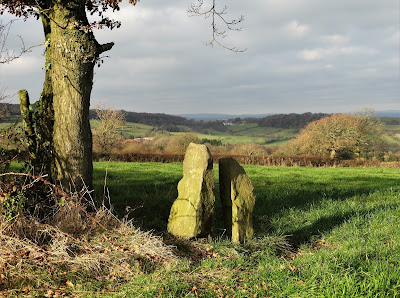 From Ringinglow on Friday afternoon, I looked across the valley of The River Porter to the old tower of Lodge Moor Hospital as a rainbow fell on Harrison Lane. The hospital was demolished years ago and now an up-market housing estate surrounds the tower. Soon after this my camera battery flashed its exhaustion. It was a pity because soon afterwards the rainbow sharpened its colours and formed an impressive arc, framing our city down in the valley. 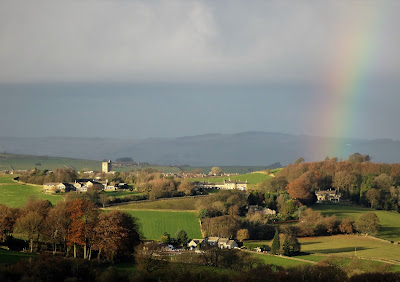 I took this next picture at The Great Pond of Stubbing where, as you can see, there's a little stone boat house. No boats are moored within it these days. I imagine long ago Edwardian summer days when little groups from the big house at Stubbing Court would saunter down to spend a pleasant hour or two boating on the pond with a wickerwork picnic hamper and a bamboo fishing rod. Not Stubbing Pond or Stubbing Lake but The Great Pond of Stubbing - maybe a good title for a new murder mystery. 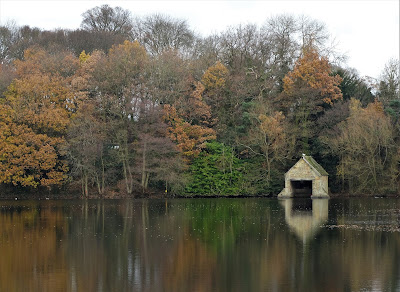