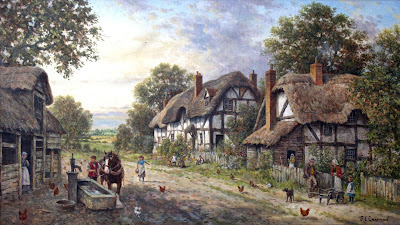 Last week the odious Boris Johnson, who has a rapacious desire to become Britain's next prime minister, was accused of back seat driving. He was, commentators said,  attempting to call the shots on our nation's journey out of the European Union. Later, his noble leader, the current prime minister - Theresa May - protested that on the journey to Brexit she would be driving from the front. There would be no back seat driving on the road to Brexit.

I thought to myself, where is this place called Brexit and what is it like there?  So I did some research...

Brexit lies between the shire villages of Narnia and Neverland. In the centre of Brexit, upon the village green, there is a maypole bedecked with blue, red and white ribbons. It's just across from "The Farage Arms" from which communal singing emerges on weekend evenings -  for example "We'll Meet Again", "Down at The Old Bull and Bush", "Jerusalem" and "Yesterday" by The Beatles.

In the quaint village shop, run by jolly Mrs Goggins, village children can buy traditional confectionery. They come running in after school, with their rosy cheeks and knee socks, slapping their sixpences and shillings on the counter before running out with liquorice,  sherbet dips and gobstoppers.

Most of the houses in Brexit are thatched with hollyhocks and old-fashioned roses growing in cottage gardens. The palatial Elizabethan manor house on the edge of the village is occupied by tousle-haired Squire Johnson and his progeny. He often screeches up to the shop in his muddy Land Rover to buy "The Daily Telegraph" and twenty Woodbines, heartily greeting fellow villagers who he privately refers to as his "serfs".or "loyal subjects".

In Brexit, people go to the village church every Sunday - St Theresa's with its  ancient Norman tower. There is still a youth club and a village hall. The annual Brexit Flower Show is always well-attended and most years The David Cameron Memorial Trophy for the biggest vegetable is won by either Farmer Gove or Mr Fox. Their beaming smiles are as legendary as their bitter rivalry and their giant courgettes.

All is sweet in Brexit. It's a place which seems to have been by-passed by the troubles of the world. Gentlemen still doff their caps and ladies curtsy. Children skip or play marbles in the playground. The village is twinned with Braunau am Inn in Austria and has featured in several TV period dramas including "Vanity Fair". Yes. Somewhere over the rainbow, the living is good in Brexit. We'll get there one day. Yes I want you to know today, that we, as a people, will get to the Promised Land.
- September 21, 2017