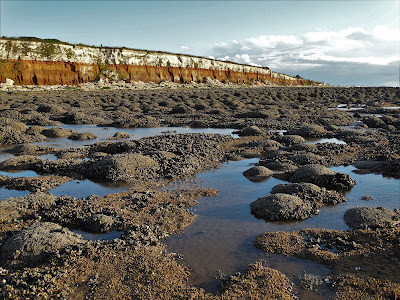 Between St Edmund's Head and Hunstanton town in the county of Norfolk, there's a very interesting cliff. It is striped and it runs for almost half a mile. You might say that it is a natural monument to the geological epoch known as the Cretaceous Period. This was a time when dinosaurs were alive and the planet was generally much warmer. It lasted for seventy nine million years between the Jurassic and Paleogene periods. Of course it occurred many millions of years before the first apes appeared.

I am sure you will agree that seventy nine million years is a very long time. During those  79,000 millennia an enormous amount of plant and marine animal debris sank to the bottom of countless inland lakes and seashores gradually forming layers that were compressed and ultimately petrified.

It is those layers that we see in the striped cliff at Hunstanton. The bottom brown layer was of course laid down first. It is made up of carstone and contains very few animal fossils. The next layer is the Hunstanton Red Rock layer. It is actually chalk but was coloured red by iron pigmentation. The thicker white layer above is also chalk  and part of the Ferriby Formation. This was laid down towards the end of the Cretaceous Period.

In both the Hunstanton and Ferriby layers many primitive fossils have been found and in a lump of the red rock I quickly spotted several wormlike fossils of creatures that were wriggling around more than a hundred million years ago. They were like these:- 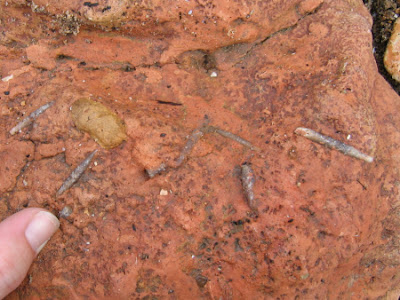 The first time we went to see the cliff, the tide was right in so we didn't get to see much but on the last afternoon the tide was right out and late sunshine was illuminating the striped cliff so that is how I was able to get pictures like these:- 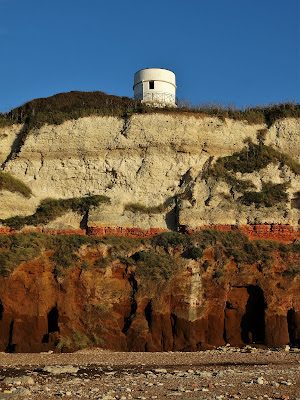 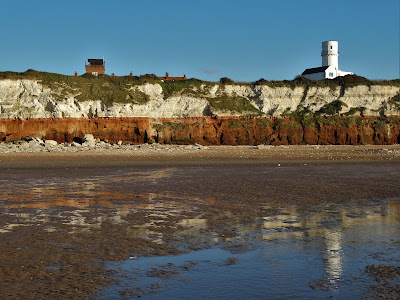