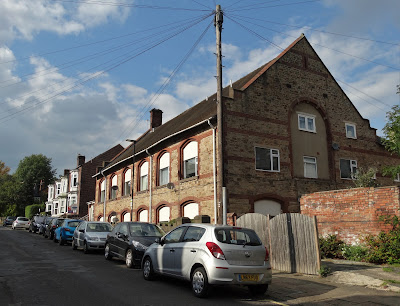 In my previous post I showed you The Harley Hotel - the first place in which I ever slept in Sheffield. I continued walking home, Having spent five hours standing at an easel my legs felt like lead so I stopped for a rest outside The Botanical Gardens and ate my apple,

On Brocco Bank, I turned into Wiseton Road where a former large chapel is located - pictured at the top of this post. It was converted into one-bedroom flats forty years ago. In 1980 Shirley and I moved into Flat 1. Previously I had been living in a bedsitter on Harcourt Road.

We were very happy in Flat 1 and it was behind the window on the left (below) that I asked Shirley to marry me. In the October of 1981  I met her at the altar in St Martin's Church, Owston Ferry in Lincolnshire and as luck would have it everything came together so that we could move into our first house the day after our one night honeymoon in Lincoln. 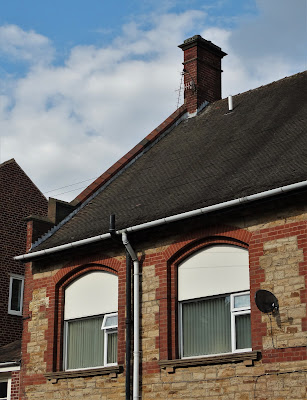 Continuing homewards, I trudged up Ecclesall Road from Hunters Bar. It is a familiar hill that I have climbed countless times before. Nearly home, I stopped to take a photograph of the newly-refurbished "Banner Cross Hotel" where I have spent a king's ransom over the past twenty eight years. It's my local:- 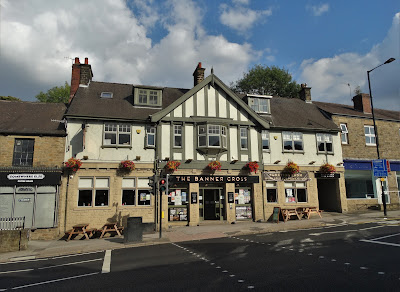 Back home, I picked two pounds of brambles (blackberries) from the bushes at the bottom of our garden and back in the kitchen I made a bramble crumble. The topping is of plain flour, soft butter, demerara sugar and crushed walnuts. I also sprinkled some caster sugar over the deep bramble base. This was our evening dessert with vanilla custard but there was plenty left for the next day. Delicious. 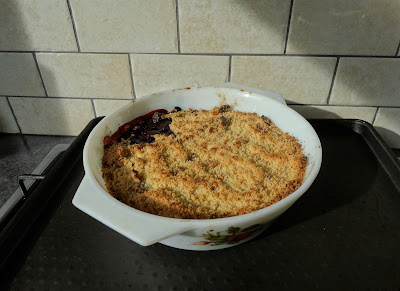