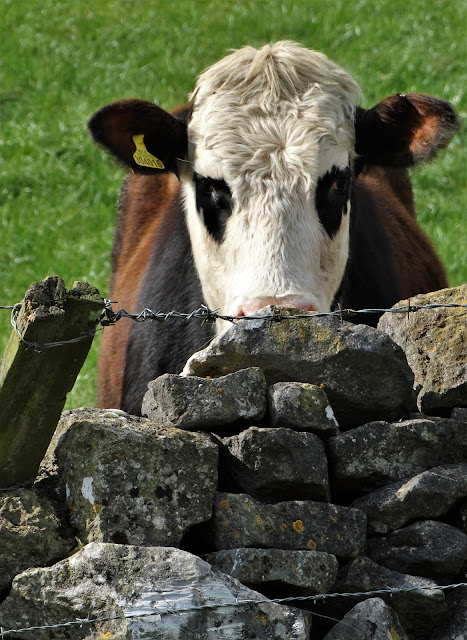 Panda-Cow was watching as I walked by on the track from Roystone Grange. What was she thinking? It's almost impossible to read a cow's mind. All I know is that they watch me whenever I enter their territory. Perhaps, like Islamic State  terrorists, they are silently planning to take over the planet.

Before I could hike up to the top of Minninglow Hill, I had to traverse a  wide cow field. The varied herd was under the command of a stocky white bull with muscles like Arnold Schwarzenegger in his prime. When he saw me he bellowed a resounding war cry, He was a four-legged Terminator.

Most of his herd proceeded to the adjoining pasture but several stragglers remained in the field I needed to cross, including a few of this year's calves. There was an edginess about this herd and Arnie continued to bellow as if to say, "Get your lazy asses down here!"

Warily, I made my way across the field, keeping as far away from the calves as I could. A big grey beast bolted down from the ridge and I had to yell a couple of "Yee-ha's", waving my hands to divert her as the ground trembled. After all, t's not a good idea to be trampled by a 1500 pound animal.

Calmly, but with heart beating like an electric generator, I made it to the opposite stile just as this beautiful brown creature posed for my camera with the lovely Peak District landscape behind her. Like Panda-Cow, Brown Cow was watching me... 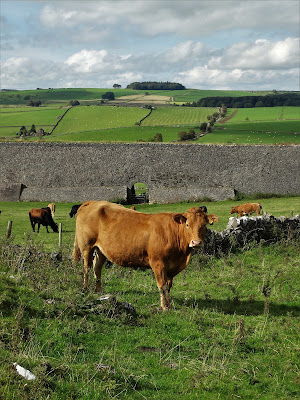