Yesterday's weather forecast was clement. Consequently, I considered a walking location. I wanted an area that was new to me knowing that this would involve a significant drive if Clint was willing to co-operate. You see the trouble is that within fifteen miles of this house I have walked every square kilometre.

I ended up driving down the M1, exiting at junction 29 on the Derbyshire/Nottinghamshire border and making for St Wilfrid's Church in Kirkby-in-Ashfield. I had checked out the location via Google Streetview. This is something I often do to visualise key junctions and the availability of suitable parking. Clint is quite picky.

With boots on I was off. First a neb round St Wilfrid's churchyard and then onwards to the wide valley of The River Erewash. Some young cows came to check me out, spellbound by my rugged handsomeness. 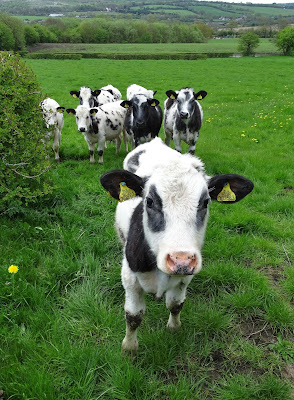 The whole area was once blighted by coal mining with railway tracks criss-crossing the landscape. The Erewash was once just a convenient drain for industry. However, nowadays you could easily fail to spot that history for the old rail tracks were closed down years ago, the coal mines have gone and Nature is doing her best to cover up the scars.
Under the M! motorway to Pinxton where I bought a cheese and onion roll and a pint of milk in a small general store staffed by a small Indian woman. Indian shopkeepers are prepared to work all the hours that God sends and you can come across them in the most unlikely places - like Pinxton for example.
Back under the motorway further north and then up the rising ground to Kirkby Cliff Farm. The paths are not so well-trodden in this area but  was able to find my way to the oddly named Franderground Farm and then up Boar Hill just to the west of Kirkby-in-Ashfield.
The circle was almost complete. "Where the hell have you been?" said Clint when I opened up his rear end and tossed my boots in. 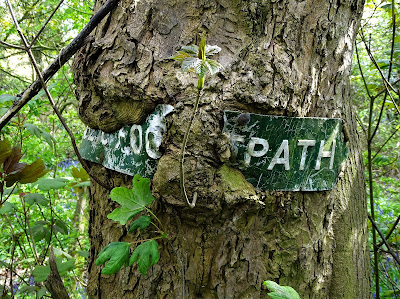