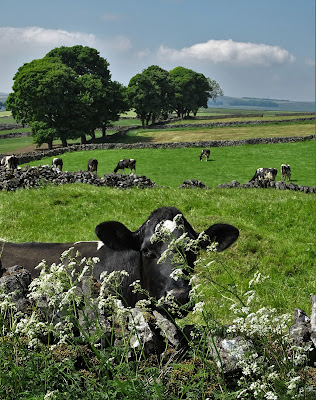 Wheston, Derbyshire. Another walk in the countryside. Walking with memories. Walking at my own pace. Each footstep pressing down on torment or conjuring up pleasant times from the past, Each footstep taking me further along the course of my life.

As my heart beats I can feel blood coursing through my veins. Nine pints of it. I picture nine pints of Tetley's bitter on a pub table. It's a lot of liquid.

There's a world outside myself. It seeps into me as I plod along, moving across the landscape like a beetle.

A cow peers at me from behind a limestone wall. She is partly hidden by cow parsley. A mile along a traffic-free lane and just before Limestone Way Farm I stop to take a picture of a wooden signpost. It is showing me the way to Hay Dale, Dam Dale and Peter Dale. There are no other ramblers to be seen. 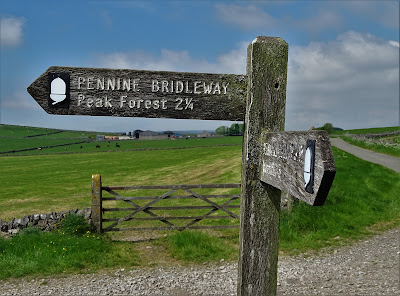 Near an old sheep fold I spot some purple orchids growing by the wayside. They are orchis mascula and at this time of year you may often spot them in The Peak District - in sheltered dales where no sheep are grazing. 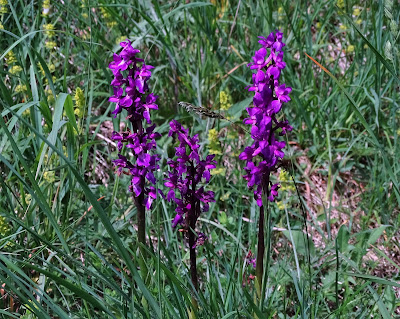 The old track curves southwards past limestone crags. Below my boots I realise that the roadway is roughly paved with thousands of small limestone rocks. Who did this and how long ago? Then I come to a view of gentle Dam Dale reaching westwards. 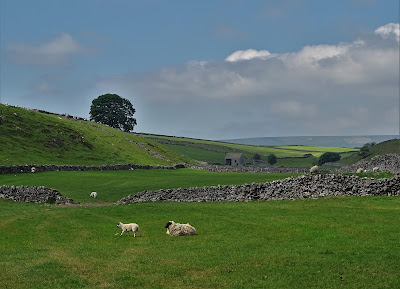 Soon I am entering Hay Dale where upon an old tree stump I notice bracket fungi growing. Like all fungi it appears other-worldly. 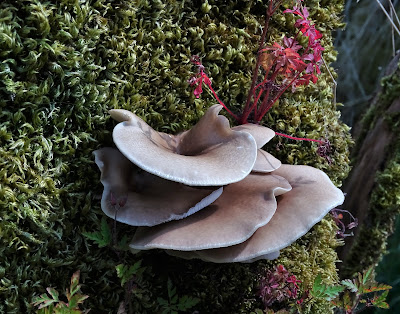 Through Hay Dale to Peter Dale. The last time I walked here there was a stream and a water meadow but now the water has disappeared below the surface of the earth. The going is dry and easy. Creamy hawthorn blossom festoons spiky branches.

Reaching a lane called Summer Cross I climb up out of the valley, reducing pace so that I can plod on without stopping. Rising to the plateau I notice a  wide verge near an overgrown gateway and realise that several years ago I parked at this very spot before hiking down Monk's Dale. It is strangely familiar.

The circle will soon be complete. At Cherry Tree Farm I stop to snap a picture of a fine, limestone farmhouse. Behind it there are two long lines of washing strung between trees. Pegged items flap languidly in the breeze. What would it be like to live in such a place? 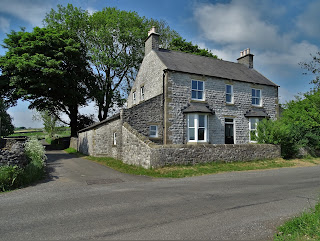 Another mile. Along Monkdale Lane. The walls are tight on either side. Just room for one vehicle. Nowhere to pull in but no motor vehicles pass by. Halfway back to Wheston where Clint is waiting under a sycamore tree I see a lonesome cow in a small enclosure with two handsome brown and white calves dozing in the late spring sunshine. 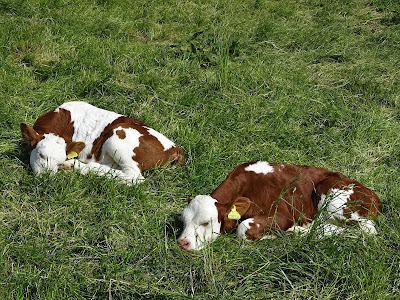 Nature and the sights witnessed seep into one's consciousness during such a ramble. Balm for the soul.
- May 30, 2018