On Saturday afternoon we travelled up the motorway to Leeds. We were in a minibus with several local friends and acquaintances - on our way to watch "Sunshine on Leith" at The West Yorkshire Playhouse. It's a feelgood musical that I first saw in the form of a film back in 2013. I blogged about it here.

Before taking my seat, I had a little stroll around the area and snapped these two pictures:- 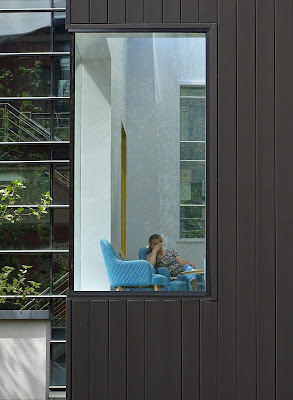 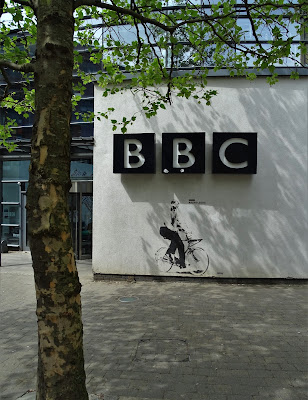 The window is part of Leeds College of Music and the stencilled picture outside the BBC building appears to be of Alan Bennett, a wry and gifted writer who is one of Leeds's most famous sons.

The musical was filled with youthful energy, cleverly choreographed dancing and familiar songs by The Proclaimers. We enjoyed it immensely. It received rapturous applause from the assembled audience.

Afterwards we were transported swiftly back down the motorway to Sheffield. Once back in our suburb we all sat down in our local Indian restaurant - "Urban Choola" and enjoyed a hearty  meal washed down with wine and "Cobra" beer.

It had been a grand day out spoilt only by the Eurovision Monster on our television when we got home. That annual phantasmagoria is a monument to bad taste, hollowness and mediocre, instantly forgettable songs. The ridiculous winner came from Israel which - like Australia - isn't even in Europe. What a mad world!