I first heard the album "Sounds of Silence" when I was thirteen years old. What songs! What loveliness! Paul Simon was and probably still is a truly gifted songwriter. Part of his genius lay in the simple humanity of his lyrics. They connected in a pure and unfussy way with other human beings.

As a teenager it was the wordsmiths of the musical world who magnetised me... Bob Dylan, Leonard Cohen, Joni Mitchell, Gordon Lightfoot and Paul Simon. They were holding a mirror up to the world like great painters or poets of the past.

My favourite number from "Sounds of Silence" was "Kathy's Song". It was plaintive and it was about memory, love and lost love. You didn't know who Kathy was but you knew that Paul Simon had really loved her. Art Garfunkel gave that song wings to fly.


Here he is in concert with Paul Simon on guitar. They were performing "Kathy's Song" plenty of years after its composition.
And as for Kathy herself.  She was an English girl from Essex. She couldn't live with the stardom and instead opted for a more obscure life in North Wales where she worked as an administrator in a college. She  still enjoys a bond of friendship with Paul Simon who she first met when he was a young troubadour, scraping a living from folk club appearances up and down the length of Britain

This was Kathy -  Kathleen Chitty on her way to work one morning in 2014. I guess she has retired now. Even Kathys grow old. 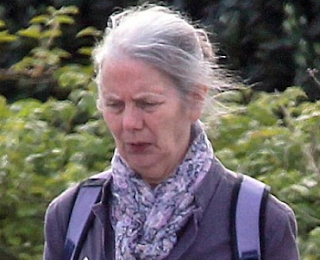