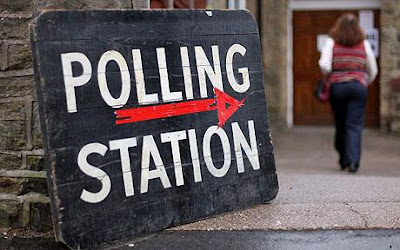 Yesterday. Six thirty a.m.. I manoeuvred Clint into a parking space outside a former synagogue.

I had morphed into a poll clerk, climbing back into Clint at ten fifteen at night. A working day that lasted for almost sixteen hours. It had been the day of local elections - for a replacement city councillor and for a South Yorkshire mayor.

Most of the time I sat at a desk with a very pleasant young woman of Indian descent. We had lists in front of us. As people entered the polling station, we had to find their names on one of the lists and then add their allocated voting slip numbers to another list.

The hours seemed to pass by quickly and the young British Asian woman, the presiding officer and I got along famously. This helped a lot.

I found the list of names and addresses fascinating. About seven hundred people living in a particular Sheffield neighbourhood. You could read things into the list. There were houses of multiple occupancy, traditional homes, lonely flats and perhaps 4% of the names spoke of non-British heritage. I found Spanish, French, Italian, Sri Lankan, Iranian, Pakistani, Nigerian and Irish names. One man was called Ian Anderson like the leader of the rock band Jethro Tull - but it wasn't him.

In the middle of the day a partially-sighted woman came in with a very belligerent attitude. I have come across her several times before in our "Oxfam" shop. She arrives ready for a fight. She will say - "Where are the books? I can't find the books! You people do NOTHING! NOTHING FOR THE PARTIALLY SIGHTED!" And you have to calm her down by speaking quietly and kindly.

Yesterday it was the same. She was shouting the odds as soon as she had stepped over the threshold. "Mayor! MAYOR? We don't need a BLOODY MAYOR!" And she ripped up that particular polling slip in front of us, scattering the pieces on the floor like confetti. I guess she lives her whole life like that - angry from dawn till dusk.

At 10pm we closed the door and packed up the polling station - quickly putting furniture back in its place and sealing the voting boxes. Andy - the presiding officer - had to get the boxes and various documents to the counting centre but I was heading for the pub after driving Clint to his familiar parking space in front of our house.
- May 04, 2018