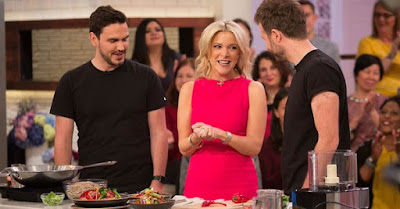 Well there they are - The Bosh! Boys. They were on a segment of  the legendary Today Show called "Make-Ahead Monday".  The woman in the red dress is Megyn Kelly, very famous in America but pretty much unknown on this side of the Atlantic Ocean. When presenting for Fox News her final year's salary was a reported $15 million.

Ian and Henry had flown over to New York City on Sunday morning. Their Today Show slot was only four minutes long but they managed to pack a lot in and seemed cool and competent in the glare of the studio lights.

Publication of the "Bosh!" cookbook was deliberately delayed in America so it will be interesting to see how sales go following their TV appearance. You might say it was a four minute advertisement for their book. In many American communities there is much interest in vegan and vegetarian cookery and the fact that "Bosh!" has been created by two British hipsters may give sales an extra boost. We will see.

Thanks to Vivian Swift on Long Island for keeping me right up-to-date with the show and thanks too for the screenshots she sent me as soon as Ian and Henry's slot was done. The journey continues.
- May 01, 2018