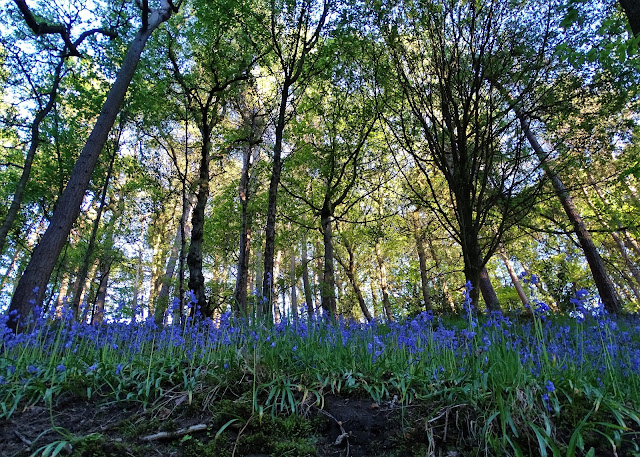 I baked fish pies - served with french beans and buttered carrot batons. We had dinner early and then I set off in the car (aka "Clint") - heading off for an evening walk in gorgeous May sunshine.

At the road junction, fifty yards from our house there had been a road accident. A Volkswagen car was on its roof and people were standing around looking puzzled. The police and ambulance hadn't even appeared yet.

The situation caused unexpected delay and I was late arriving at my starting point on the Baslow road  well south of Sheffield by Big Moor.  The sun was now lower in the sky than I had anticipated.

I descended to the valley of Millthorpe Brook along an old cart track known as Car Road. In an adjacent bluebell glade I disturbed a deer. It bounded off before I could reveal my camera and switch it on. I have missed some of the best pictures that way. 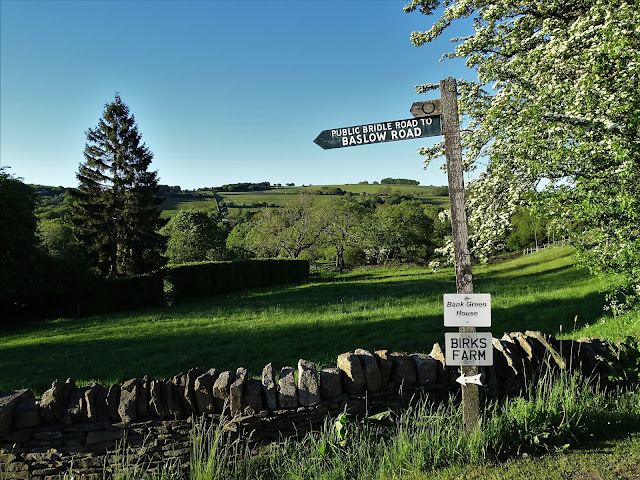 At Bank Green, I needed to cut across some green meadows along a little used public footpath. There was a small herd of dark brown cows there. I think the breed may have been Red Poll. They looked at me with great suspicion as if perhaps I might have been sent  by the local abattoir. I noticed a group of adolescent calves amongst them and a certain tension in the herd. They were starting to panic. Then a muscular young bull arrived through a gap in the hedgerow and it was as if he was snorting, "What the hell is going on?"

No reply was necessary even though I can talk bull quite fluently. I decided it was wiser to backtrack then find a different way to descend to Millthorpe Brook. I noticed sunlight illuminating trees above the valley while below bluebells were already bathed in shadow waiting for night to fall (see the top picture).

Round in a circle and then the long slog back up Car Road until I was once again in evening sunlight looking out over the wide expanse of Big Moor.

It was half past eight and time to hurry home ready for the pub quiz at "The Hammer and Pincers" with the two Michaels. By the way, we won one of the main prizes. Our brains still retain some useful information such as the fact that "Goldfinger" is not only the title of a James Bond film, but the name of a banana too.
- May 22, 2019