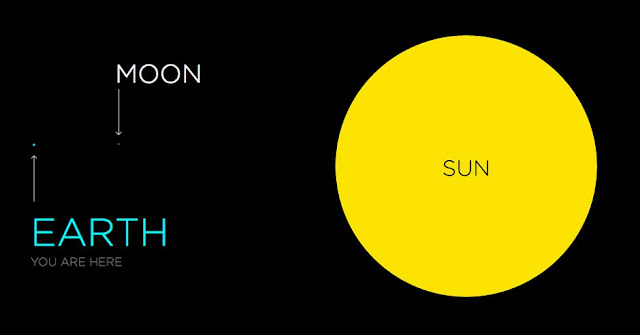 Please picture a mile. Imagine walking that mile in one straight line. That mile represents the size of The Earth.

Now imagine flying round the planet. A full circuit would be just under 25,000 miles. That is too far to walk but most of us can imagine a non-stop round-the-world flight returning to the city we set off from.

Now imagine repeating that orbital flight until you have completed forty circuits of the planet. You will have travelled a million miles in total. 40 x 25,000 = 1,000,000 (one million). That million represents the size of The Sun.

Picture it. That single mile you walked (The Earth) and those forty round-the world flights (The Sun). This ball we are all living on is not much more than a speck of dust compared with that ginormous fiery orb which shines upon us day after day. When you lie on the grass in summertime you can pretend to hold The Sun between your thumb and index finger but of course that is just an illusion connected with the fact that The Sun is 93 million miles away - in other words the equivalent of 3720 round-the-world flights.

These thoughts and calculations arose after hearing Professor Brian Cox on the radio yesterday morning. He informed listeners that The Sun is a million times bigger than The Earth. Wow! I must admit that until now I had never really appreciated the sheer enormity of the  size difference. Our planet is roughly the size of an ant on a hot air balloon.