In Tuesday's glorious sunshine, I was keen to walk in unfamiliar territory. My drive took me north of Sheffield via Stocksbridge and Langsett. I was on the road to Huddersfield but at Holmfirth, I branched left for Meltham and that is where I parked my silver hire car.

I was no longer in South Yorkshire. This was most definitely West Yorkshire - once home to countless textile mills that tapped into the power of Pennine streams. Meltham shelters some nine thousand souls.  The older houses are all built from hard sandstone. They are solid and they endure - just like the Yorkshire character itself. Once wool and cotton workers inhabited those streets but most textile industries collapsed long ago and places like Meltham have had to discover new ways to exist.

From Meltham I walked through woodland to Honley where I treated myself to a small  bag of deep fried potato fingers - what we in England call chips. I shook malt vinegar and salt upon them  then sat on a shady bench consuming them along with a cold can of diet Coca Cola.
Somewhere in Honley I managed to lose my house key. It must have escaped from the zip pocket on the front of my camera case. Fortunately, I did not also lose the key to the hire car which would have caused untold inconvenience and would also have incurred a £300 replacement fee.

I was kicking myself about losing the key but I still enjoyed the rest of my sunny walk via Netherton and Blackmoorfoot Reservoir, then on to the charming village of Helme where a woman on a chestnut black horse passed me by for a second time. 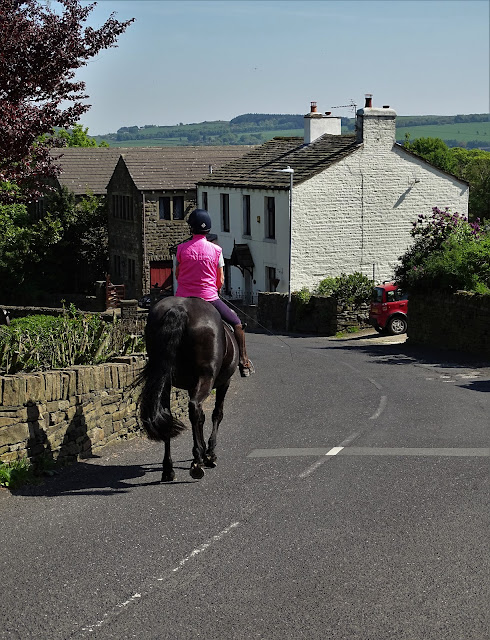 Luckily, my house key was attached to a clear plastic key ring into which I had inserted our telephone number on a  green label. And as luck would have it, soon after returning to Sheffield I received a call from Honley. A woman named Rachel had found the key and had kindly left it in the village foodstore.
I have just sent the shop a stamped addressed envelope so that they can mail the house key back to me. Sometimes it is easy to forget that most people are like Rachel - kind, helpful and honest. They don't get as much airtime as they deserve - rather like Kourtney...
- May 17, 2019