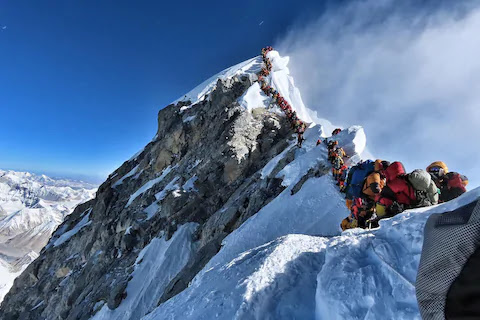 This picture was taken ten days ago on Hillary Step leading to the summit of Mount Everest. When I first saw it, I assumed that it had been cleverly photo-shopped. But no - this is reality. A hundred climbers are queuing to get to the top, like bargain hunters outside an electrical store on New Year's Day waiting for the sale to begin.

Waiting around up there on the world's tallest peak cannot be a good thing. The air is so thin and it is awfully cold. Being up there can do funny things to your mind. Surely the climbers need to keep moving, get to the summit and then turn back, heading down, hopefully, to safety. There should be no queuing.

Other thoughts cross my mind about that picture. Firstly, the climbers all appear to be wearing state-of-the-art climbing apparel - lightweight and well-insulated. It's very different from the gear that Norgay Tenzing and Edmund Hillary were wearing when they made the first successful ascent on May 29th, 1953. There were certainly no queues that day.

Most modern climbers approach Everest from the Nepalese side. They will have flown to Nepal from faraway countries with yet more money in their banks and a burning desire to stand on top of the world's tallest mountain (8,848 m 29,029 ft). Later, if they survive, they will be able to tell their friends and families that they have crossed Everest off their bucket lists -"It was awesome!"

To secure  permission to scale the mountain a climber has to buy a pass from the Nepalese government. It costs around £8000 or US$10,000. Then there are local mountain guides and carriers to pay along with insurance, food supplies, tents, sleeping bags etcetera. Getting to the top of Everest does not come cheap.

I will probably never see Everest - let alone stand on its lofty peak - but it has a place in my heart. Back in 1943 my father visited Everest base camp while walking and climbing in the high Himalayas. Ten years later I was born - in the very same year that Tenzing and Hillary reached the top. Subsequently - in the spring of 1970 - I met Lord Hunt at a reception in St James's Palace, London. John Hunt was the leader of the 1953 expedition.

There's something quite distasteful about the top picture but that distaste is hard to pinpoint. Perhaps it's to do with human urges to conquer all that the natural world has to offer.  Perhaps it's to do with western affluence and having funds to squander on such a selfish enterprise. Perhaps it's the recognition that there are many other high peaks in The Himalayas - maybe not quite as tall but much quieter, just as challenging  but rarely climbed.

Another thing about that mountain is that it can so easily take your life. Eleven climbers have died on Everest this season. What about the loved ones left behind? What are they supposed to think?
From "The Denver Post" - yesterday:-